Solar power to brighten up BWSL 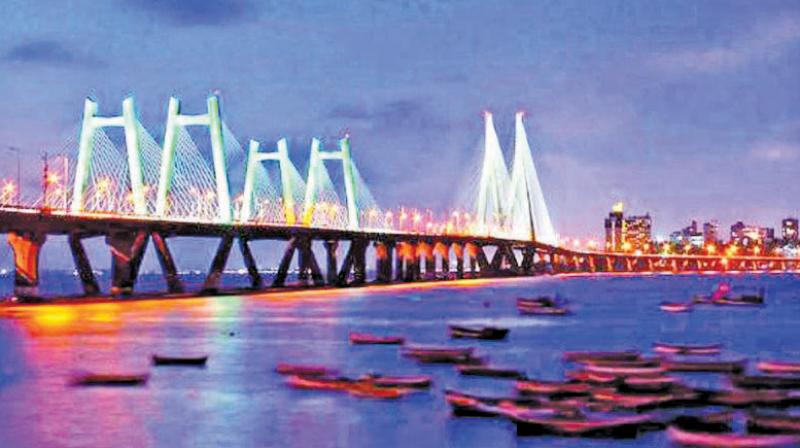 Solar energy will lit up the site office, toll booths and cables at the BWSL from April.

Mumbai: Come April, the 5.6-km-long Bandra Worli Sea Link (BWSL) will be illuminated with the help of solar panels that will be installed at both ends of the sealink. The move is aimed to bring down the expenditure on electricity consumption and also pave way for green energy. The Maharashtra State Road Development Corporation (MSRDC) believes installation of solar panels will bring down their electricity bills by 60 per cent.

It also wants to push the Central government’s initiative of promoting solar energy and cut down carbon footprints.

Kiran Kurundkar, joint managing director, MSRDC, said, “We have already floated bids for the change of operation and maintenance of contractor for the sealink. The current operator MEP infrastructure’s tenure will end by February. While appointing the new operator against the upfront payment of Rs 360 crore, one of our condition that the contractor will have to fulfil is installation of solar panels for generating electricity for the sea link.”

Currently, the BEST and Reliance energy are supplying electricity for the sea link.

“The expenditure is around Rs 1.10 crore annually. We expect to generate 355 kilovolt (KV) from solar panels and cut down expenses,” said a MSRDC official.

According to the MSRDC, solar panels would be installed on the sideways near the toll collection booth at the Bandra end.

The power generated from the solar panels will help illuminate the 50 streetlights on the sealink, site office, toll booths, suspended cables and the aviation obstruction signal. The 8-lane BWSL was inaugurated in 2009 to provide an additional outlet from the island city to the western suburbs between Bandra and Worli. Further, the toll is also to be increased for using of sea link in 2018.