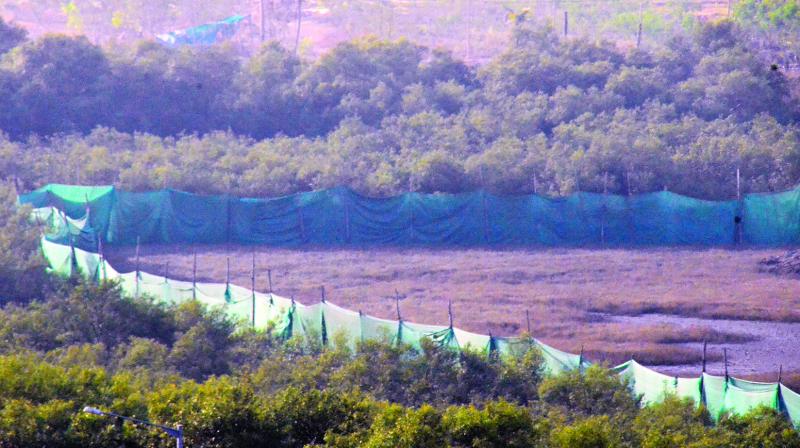 A satellite image of wetland in Gorai.

Mumbai: A confidential report by chief conservator of forest of mangroves cell accessed by The Asian Age has claimed that Pan India Paryatan Ltd (PIPL) of Essel group destroyed 50-acre mangroves land to carry out the construction of a resort in the wetlands of Gorai.

New Link Roads Association Forum has claimed that 50 acres of wetlands in Gorai have been destroyed. The forum claimed that it had alerted all the concerned authorities when 15-acre of wetland was destructed. It had also shown the satellite images of the destruction of additional 35 acres wetlands to the authorities.

Despite filing several complaints to senior most police officials, the forum claims that no action has been taken against the mangrove destroyers.

According to the report, Mangroves cell has been receiving complaints alleging that mangroves were destroyed as the sea water which enters through pipes was blocked. After the investigation was launched, the Mangrove Cell Unit found that seven to eight pipelines supplying tidal water to mangrove areas were blocked with stones.

In 2014, Gorai Machchimar Sahaakari Sanstha Ltd. filed several complaints against the management of Esselworld, alleging destruction of mangroves in the premises of PIPL. Acting on the complaints made by various organisations to the principal secretary of the forest department, Suresh Thorat, additional principal chief conservator of forests (APCCF) inspected the site along with the Mangrove Cell.

The APCCF concluded that Esselworld management had systematically and deliberately destroyed mangroves on private land.

The letter stated that the company was given permission to construct water-harvesting structure at various points of time by authorities, however, PIPL conveniently chose to ignore the important conditions. The letter stated the PIPL disturbed the natural course of sea water.

The letter also claimed that PIPL planted mangroves saplings on 12-hectre land but “it cannot be considered as a compensation due to active tree cutting in three gunta area due to land activities carried out by the company.”

Activist Harish Pandey who found the confidential letter in an RTI reply said, “I don’t know why the authorities are just watching the massive destruction of our mangroves. We will move high court and file a fresh affidavit in this regard. Our complaints have also been escalated to the Wetlands Committee constituted by the high court and the Konkan Commissioner.”

However, the spokesperson of Esselworld Chintak Patel has dismissed the allegations, saying, “The fact mentioned in the letter from New Link Residents Forum, dated 27/03/2017 mentioning massive reclamation of wetlands and destruction of mangroves by PIPPL is not true and absolutely baseless.”

He further added, "At the onset it is to be pointed out here that, MCGM, MCZMA, SEIAA all have approved the augmentation of the existing Rain Water Harvesting Scheme (RWHS). Further, in lands around the RWHS ponds have been cultivating mangrove saplings in poly-packs which are transplanted to the designated mangrove site. The RWHS scheme is thus currently in operation. The operation and maintenance procedure however involves laying of soil around the lands of RWHS Ponds, which were earlier never occupied by mangroves."

"All the allegations are misleading. Ecological balance is of prime importance to us and as a responsible organisation we ensure absolute accountability in every initiative of ours."