Cops smell a plot in seizure of notes

Believe note’s owners may have tipped off about notes in bid to retrieve currency later. 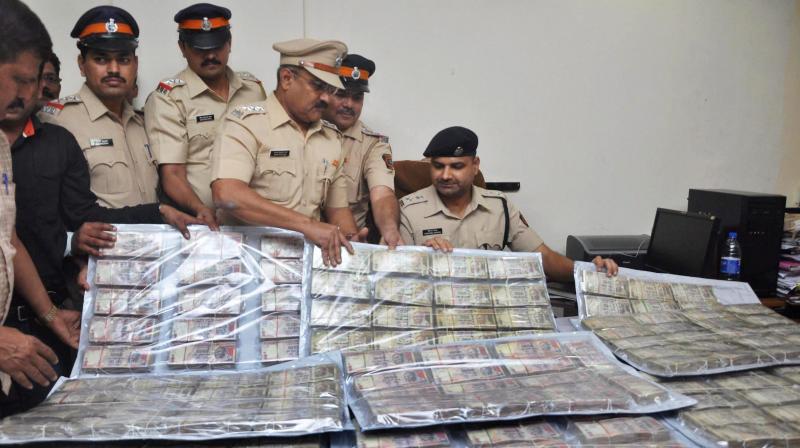 Mumbai: The Mumbai police suspects that in a majority of the 25-odd cases involving the seizure of demonetised currencies worth around Rs 22 crore in the city since January this year, it could be men with associated their owners who allegedly gave the anonymous tips.

It is being examined whether the tip-offs were allegedly given in an attempt to retrieve portions of the currencies that were subsequently seized using alibis once the case went for further probe to the Income Tax (IT) department, police sources said.

The banned notes could be exchanged with legal tender after December 30, 2016 except in the cases of NRIs and Indians who were abroad during November-December 2016, when the demonetisation decision was taken.

After the seizures, the police hands over the probe to the IT department, which begins investigating the source of the money.

The police has alerted the Income Tax department to conduct a “deeper probe” to ascertain the motive and the modus operandi seen to be in play in such seizures, sources said.

The police’s suspicion arose due to the fact that in most of these cases, there was no trace of any actual middleman who could have exchanged the old notes with legal tender.

Further, in most cases, new notes were not found, said sources. In most cases, the police was told by men detained with scrapped notes that the currencies were to be exchanged with legal tender allegedly by “an unidentified RBI employee”, a claim that was found to be false, a police officer told The Asian Age.

The officer said, “The owners claimed that the middlemen were to arrive in an official van with currencies of new notes to exchange with old notes. Their claims were unverified, aimed at misleading us.”

According to the officer, in none of the cases, the exchange actually happened, even partially, so no new notes were found that could have proved the existence of a middleman or his ability to exchange the old notes with legal tender.

According to the source, it is being examined whether the aim of those behind the seizures was to somehow find ways to retrieve the seized notes by showing them to be part of legal transactions.

While the December 30, 2016 deadline was the original deadline for depositing scrapped notes, March 31 was the deadline for those Indians who were abroad during November–December 2016. The demonetisation decision was taken by the Centre to curb unaccounted money, counterfeit currencies and terror funding.

When contacted by The Asian Age, a Reserve Bank of India spokesperson said, “This is a police matter entirely. We cannot comment on this.”