The police has remanded him in police custody till Thursday and will transfer the case to the IT department after the police’s probe. 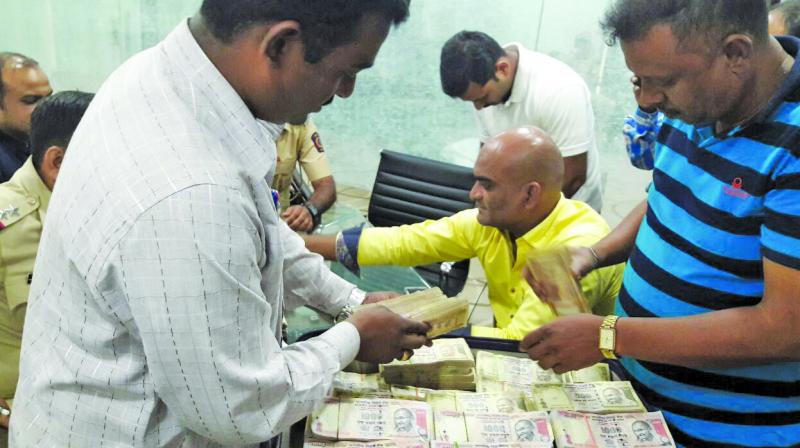 Officials with the seized demonetised currency.

Mumbai: The Powai police and Juhu ATS have recovered demonetised cash worth Rs 1.70 crore on Sunday afternoon. The police seized the banned currency from Ajay Gupta (36), a businessman from Kandivali east, who claimed that he had gone to deposit the money on Friday, but was unable to exchange the cash because of the crowd.

According to officials, the police raided the office of Ajay Gupta, situated at Saki Vihar Road in Powai on Sunday afternoon, acting on a tip-off. In the raid, the police found demonetised cash in the banned denominations of Rs 500 and Rs 1,000 worth Rs 1.70 crores in his office. Gupta is a businessman in the construction and production business. The police said that the money belonged to the earnings from these businesses and did not come from any illegal activity. He also said that he had waited in the queue in the Reserve Bank of India to get the notes exchanged, but his turn did not come till the deadline of 4 pm.

Speaking to The Asian Age, Balasahed Gavhate, the investigating officer of this case said, “We are questioning Gupta to find out the source of his demonetised cash. In the probe until now, we do not see any role of an agent, and have ruled out the possibility of any third party interference. We are probing the case and will remand him in police custody till Thursday.”

The police has remanded him in police custody till Thursday and will transfer the case to the Income Tax department after the police’s probe.