Based on the UP model, it will only create unrest among farmers, they claim. 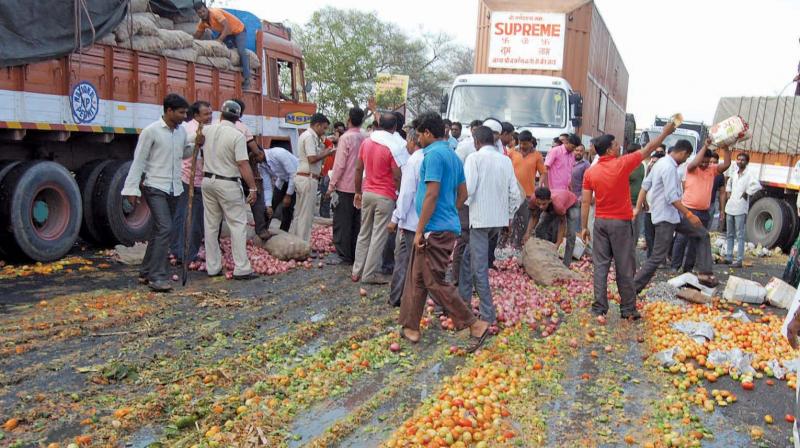 A file photo of agitated farmers protesting on the streets.

Mumbai: Chief minister Devendra Fadnavis’ assurance of a loan waiver to small land holding farmers has raised questions about the fate of other farmers, who are also in distress. The government’s possible parameters for the loan waiver are likely to be based on Uttar Pradesh’s loan waiver model, which was targeted at farmers with a holding of five acres, sources in the government said.

However, experts feel that the decision, if taken, is likely to create unrest among the farmers, as it would discriminate between them, when the reality is that all of them are in trouble. The agitating farmers have been demanding a complete loan waiver for all, while the government has assured it only for small land holding defaulters.

Mr Fadnavis assured that he would think about the farmers’ loan waiver till October 31, as well give due consideration to an act for minimum support price, forming commission for agriculture prices, increasing milk prices, waiving off electricity bills, among others. The CM also said that he would appoint a committee of government officials, ministers and farmers’ representatives to decide parameters for the loan waiver.

According to sources in the CMO, farmers with holdings of 5 acres will be considered for the loan waiver. However, experts feel it would not serve the purpose. “It could be discriminatory if given to small land holding farmers. Questions will be asked about farmers having little more land or those repaying loans on time. All the farmers are in distress and facing losses though some of them have more land holdings. The selective loan waiver will not help the farmers,” Dr Sharad Nimbalkar, former vice chancellor, Panjabrao Agricultrue University said.

The leader of the Shetkari Sanghatana, Vijay Jawandhiya, opposed the government’s move on loan waiver to selective farmers. “We do not want loan waiver like Uttar Pradesh, but a waiver for all the farmers. Also, the promise about forming a law for ensuring minimum support price was misguiding. The centre decides the support price and the state has no control over it. Even if the government’s proposed commission for agriculture prices comes into place, will the government accept the prices decided by them?” he asked.  He also reminded that the UPA government had given Rs 20,000 to those farmers who were holding more land and did not fit into the loan waiver criteria.

“The government will first restructure the debt of farmers then fresh loans would be given to them. So very few farmers would get loan waiver. Also, restructuring a loan would not help as the government will pay instalments for a year only,” Dhondge said.

“The assurances given by Mr Fadnavis are not less. I think, it’s time now that farmers go back to their fields and start working for the coming season,” he added.