When farmers hit the streets on June 1, the CM called them for discussion. But, his attempt to pacify farmers’ representatives failed. 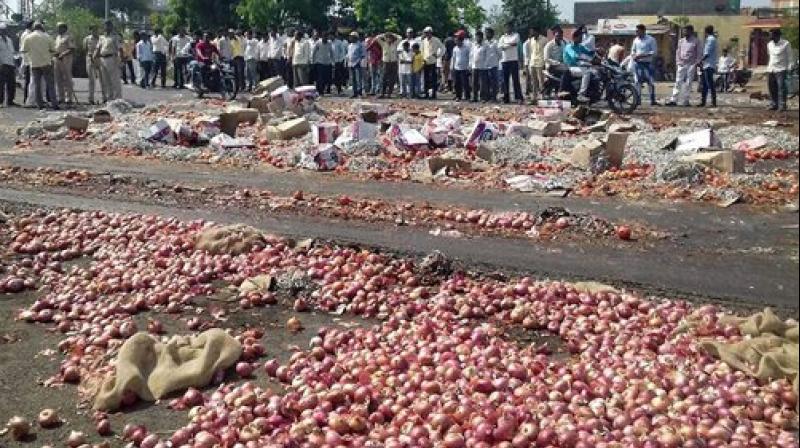 Farmers throwing onions and other vegetables on the road during their state-wide strike over various demands in Nasik. (Photo: PTI)

Mumbai: A few senior leaders of the Bharatiya Janata Party (BJP) in the state are worried about the political damage caused to the party due to the ongoing farmers’ strike in the state. A lobby of senior leaders including a few ministers are trying to isolate themselves from the farmers’ anger. Hence, chief minister Devendra Fadnavis has to face the battle alone. Murmurs of dissatisfaction over the handling of the crisis by Mr Fadnavis are growing within the party. But with Mr Fadnavis enjoying support of the party’s high command, no leader is taking the risk of speaking out.

The BJP has been cornered over the farmer crisis issue in last four to five months. Umbrella organisation of farmers, Kisan Kranti Morcha, had threatened to go on a strike almost a month ago. Many senior BJP leaders believe that the state government should have called all organisations for discussion. Instead, Mr Fadnavis chose to meet a group of farmers from Puntambe village where the idea of the strike originated.

But the chief minister’s move failed, as the delegation of farmers could not influence a large number of farmers’ organisations. Sources told The Asian Age that senior BJP leaders had suggested Mr Fadnavis to take all farmer organisations on board instead of holding a meeting with a group of farmers. However, Mr Fadnavis had another plan to tackle the protest. This compelled other leaders to take a back seat.

When farmers hit the streets on June 1, the CM called them for discussion. But, his attempt to pacify farmers’ representatives failed. Now, a large section of farmers’ organisations are planning to intensify protest.