Kumar took to the social networking platform Twitter and uploaded a photo in which he is dressed as a traffic police constable. 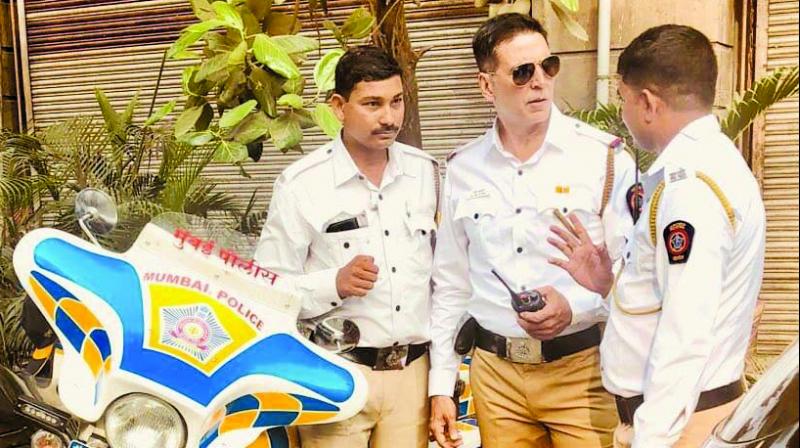 Akshay Kumar uploaded a photo in which he is dressed as a traffic police constable.

MUMBAI: Bollywood actor Akshay Kumar has joined hands with the Union ministry of road transport and highways to promote road safety. Kumar took to the social networking platform Twitter and uploaded a photo in which he is dressed as a traffic police constable, along with real-life police personnel, and hoped that the campaign would create awareness about road safety.

Kumar tweeted, “Honoured to associate with@MORTHRoadSafety and take forward the 'Road Safety’ movement. I sincerely hope the campaign will bring about a behavioural change towards traffic & road safety and in turn help save precious lives (sic).”

In a befitting reply to Kumar’s tweet, the ministry of road transport and highways tweeted: “We sincerely appreciate Mr Akshay Kumar for his commitment to the cause of Road Safety. Sadak Suraksha Jeevan Raksha. Let’s follow Traffic Rules and save lives.” The actor has many a time lent a helping hand to curb various issues plaguing our country, highlighting Swachh Bharat Abhiyan causes in his films such as the importance of toilets in Toilet - Ek Prem Katha and menstrual hygiene in the recently released Pad Man.

In a bid to meet the target of reducing the number of road fatalities by 50 per cent by 2020, the ministry of road transport and highways has taken various steps such as establishing a road safety information database, encouraging safer road infrastructure and enfor-cement of safety laws.