As per the minutes of the meeting, all private and government hospitals have been kept on alert for the same. 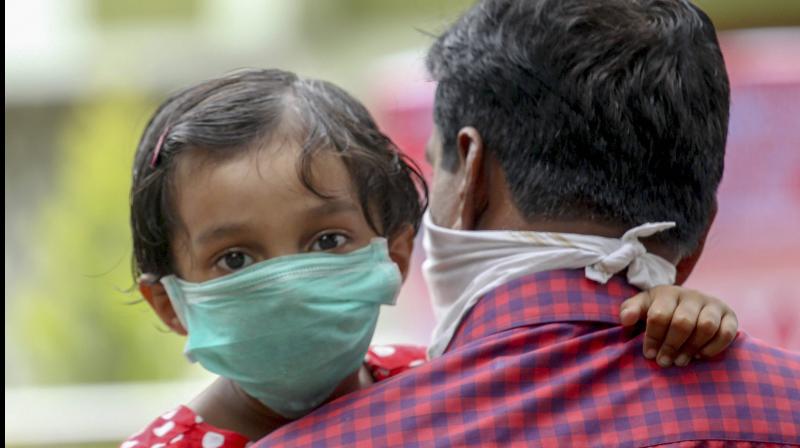 A child wears a safety mask as a precautionary measure after the 'Nipah' virus outbreak at Kozhikode Medical College. (Photo: PTI)

Mumbai: After the 17 deaths caused by Nipah virus in Kerala, the state public health department met the officials from the National Institute of Virology in Pune, on Saturday to review surveillance strategies to detect Nipah cases in the state.

The health department has assured that there is no cause for worry and that tourists returning from Kerala will be screened for possible symptoms. As per the minutes of the meeting, all private and government hospitals have been kept on alert for the same.

Dr Pradeep Awate, state surveillance officer, said, “The public health officials at primary health centres are being trained to identify symptoms and transmission of the virus.”

“We are strengthening the surveillance to detect Nipah cases in the state and have already issued the advisory as well as kept laboratories and isolation wards on stand by,” he added.

Meanwhile, the state health ministry has advised against any travel or trade restrictions in affected parts. While talking to The Asian Age, state health Minister, Dr Deepak Sawant, said, “Though till date, patients with the Nipah virus infection have not been found in Maharashtra. I urge people to avoid visits to Kerala.”

He added, “As a precautionary measure, government has created an isolation ward at Kasturba hospital to treat Nipah virus.”

HC to hear solution Isolation wards are being set up in hospitals. Isolation is the only care for Nipah Virus (NiV) affected patients since infection with NiV is associated with encephalitis (inflammation of the brain). There are currently no drugs or vaccines to treat NiV infection. Intensive supportive care is recommended to treat severe respiratory and neurological complications.