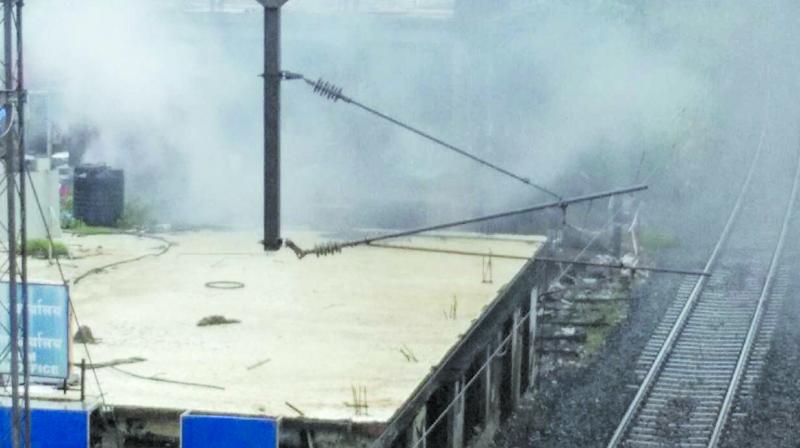 Fire broke out at an under-construction ticketing office on the east side of Mira Road railway station.

Mumbai: A fire which broke out at an under-construction ticketing office on the east side of Mira Road railway station led to further chaos Tuesday morning. Fortunately, no injuries were reported at the single-storeyed, under-construction structure near the platform towards Churchgate.

At around 8.40 am, some commuters saw fumes emanating from the structure following which, railway police personnel and station officials rushed to the spot and doused the fire.

It emerged that a bunch of PVC plumbing pipes lying at the site had caught fire. While the exact cause is yet to be ascertained, sources revealed that the place was frequented by drug addicts and that their carelessness could have caused the accident.

“We did not receive any call from the railway authorities nor did the contractor care to inform us. However it was only after learning about the incident on social media platforms that our team rushed to the scene. The fire was quelled and our personnel conducted cooling operations,” said Mira-Bhayandar municipal corporation’s chief fire officer, Prakash Borade.

Meanwhile a short circuit took place at Virar railway station on Tuesday evening. No casualty was reported. The fire was doused off after a commuter noticed the fire and  raised an alarm.

According to a WR official, the spark was in MSEB box at platform 4. The fire broke out at 6.50 pm and affected power supply to all four lines, forcing the railways to run trains only up to Vasai and Nallaspora. The power supply was restored at 8.45pm and the services  restored.