Few say they were stranded for over 12 hours at airport. 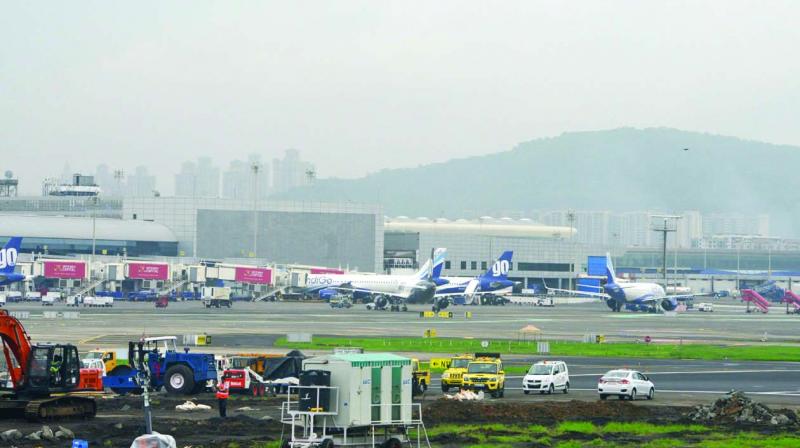 Mumbai: Chaos reigned at Mumbai airport as relentless rain disrupted flight services and the main runway remained shut after a SpiceJet aircraft with 167 passengers overshot the runway and was found stuck in soft mud on Monday.

Frustrated passengers were seen arguing with the ground staff at the airport. Many claimed that they were left stranded at the airport for over 12 hours and the airlines made no alternate arrangements for them.

As many as 75 flights were cancelled on Wednesday even as Air India engineers and technicians were still working to haul the Boeing 737-800 aircraft that skidded on Monday night.

Many passengers took to Twitter to vent out their anger. One commuter, Bhola tweeted, “There was complete chaos at the Air India counters. Only two counters were opened due to short staff, which lead to a long queue. The situation could have been managed better.”

“It was total chaos at the airport and we had to wait for eight hours at the domestic airport before our plane could leave for our destination,” said Asif Shaikh, a frequent passenger said.

“Elderly passengers were made to wait and not only were the airline staff missing from the counter, but also the details of our flight were removed from the board. No food or water was offered by the airline and we had to bear the additional expenditure of food,” Mr Shaikh said adding that the passengers were co-operating with each other.

A friendly atmosphere developed amongst the passengers as many exchanged contact numbers and clicked pictures together.

“Chaos total chaos at Mumbai airport at @IndiGo6E gates! The weather is better but there are no assignments of flights. People are waiting since morning! The entire terminal is like a bus station.” Anand Mathur, another passenger tweeted.

“Besides cancellations, the operations are going on smoothly. The operations from the secondary runway are being carried out since Monday night,” an official said, adding that the aircraft recovery would take some more time.

A team of engineers and technicians from Air India has begun to haul out the stuck SpiceJet plane with the disabled aircraft recovery kit (DARK). “A 150-metre long ramp is being prepared to push the aircraft out of the grassy area,” an official of the Mumbai International Airport Limited (MIAL) said.