Mr Shah took cover under two handcarts that were parked there to save himself from getting crushed. 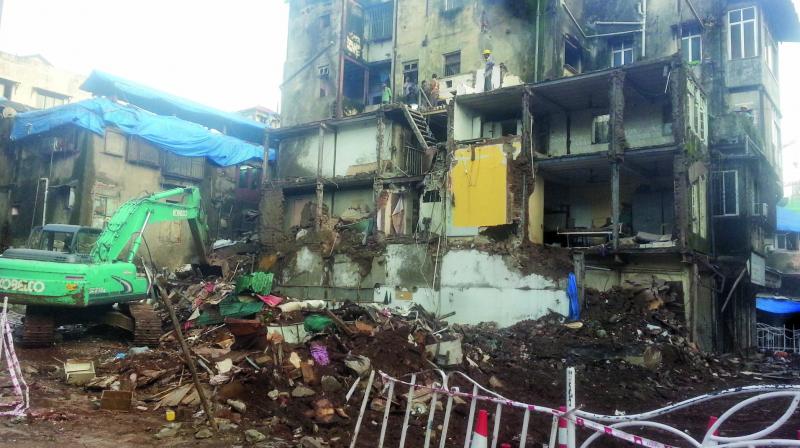 34 died after the six-storeyed building collapsed.

Mumbai: Thirty-five-year-old Ahmed Shah was busy speaking on the phone near a ground-floor shop in the six-storeyed Husaini building in Bhendi Bazaar on Thursday morning when loud, booming sounds startled him. He thought it must be an aircraft that was flying close by, but the sight of walls cracking and debris falling around him made him realise what was actually happening.

Mr Shah took cover under two handcarts that were parked there to save himself from getting crushed. Three and a half hours later, he was extricated alive from the debris by rescue personnel. Recuperating from fractures in both his legs at JJ Hospital, Mr Shah, a social worker, told The Asian Age that he is “lucky to be alive”. The crash claimed 33 lives.

On Sunday, only two victims of the Hussaini building collapse — Mr Shah and another patient Abdul Latif — remained in JJ after four others were discharged.

Pakmodia Street and other adjoining lanes wore a deserted look on Sunday except for a small crowd that was present at any given time near barricades put up by the police to keep the public away from the collapse site, to witness the work of removing debris.

“Today I requested the men present at the site removing debris to demolish hazardous parts of the building smoothly because we felt that if handled roughly it would weaken our building too. After our request the workers are working carefully that they do not damage our building,” said Salman Kazi, who stays in the adjacent Damarwala building.

Apart from residents of the Hussaini building there are others who bore the heat of the collapse. Mohammad Sharif Qureshi said, “We owned a godown and a small shop of fast food in the chawl situated next to the Hussaini building. But it collapsed on our chawl and destroyed our property completely and left us jobless.”