The immersion procession was delayed as there was a high tide of 4.54 metres at 2.41 pm. 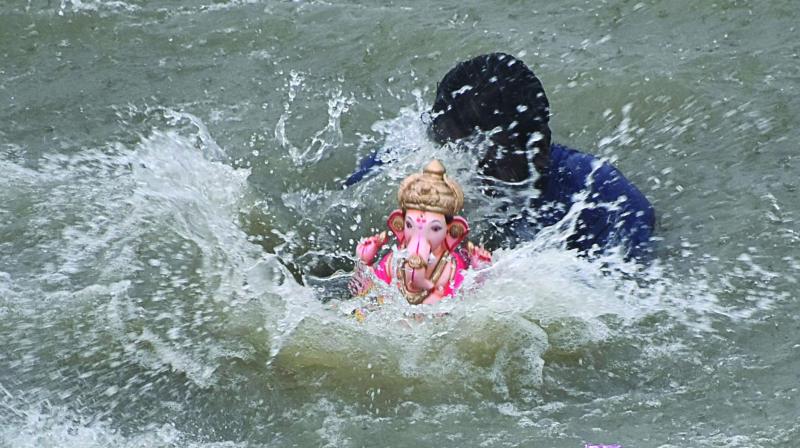 A man immerses Ganpati idol at in the Arabian Sea at Dadar Chowpatty on Tuesday. (Photo: Debasish Dey)

Mumbai: Devotees who brought home Lord Ganesha idols for one-and-a-half days carried out the visarjan (immersion) at the Dadar and Juhu beaches, albeit with delay due to heavy rain and high tide.

While immersion processions began at 4 pm at Dadar beach, Brihanmumbai Municipal Corporation (BMC) officials said that there were marginally fewer eco-friendly Ganesh immersions this year according to early reports.

“The immersion procession was delayed as there was a high tide of 4.54 metres at 2.41 pm. As a precautionary measure, mandals were asked to immerse idols after 4 pm only. We also deployed workers at beaches and artificial ponds to help people with the immersion,” said a BMC official.

A citizen who visited Dadar beach said that the fervour was less this time as compared to last year. Several spots in Mumbai were waterlogged in the morning, causing traffic woes and leading to inconvenience in ferrying the idols to the immersion spots.

“We were stuck in traffic for almost one-and-a-half hour at Sion and reached the Dadar beach not before 6 pm. Although the city sees rain mostly every year during visarjan, due to the continuous downpour since Monday night, the roads were waterlogged,” said Usha Shekokar, a resident of Kurla.

“We urged the devotees who came to the Dahisar River for Ganpati visarjan to immerse idols in artificial ponds of SGNP. This will prevent harmful che-mical and paints from entering the natural riv-er,” said Vikram Chogle, member of River March.