Plea seeks order to stop use of main runway at CSIA

The motion has sought directions to the DGCA to name the officer who will be inspecting the RESA. 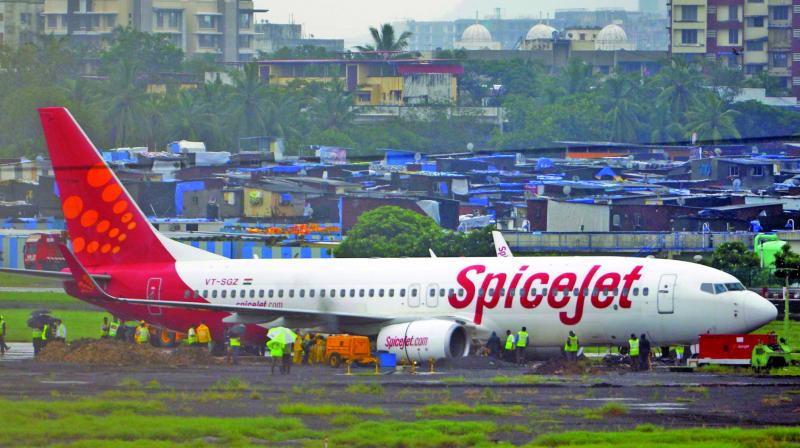 A SpiceJet flight slid off the runway during landing at Mumbai’s international airport on September 19.

Mumbai: In the light of revelations by the deputy general manager (Aviation Safety) of how the September 19 incident involving the SpiceJet Airways flight that overshot the runway could have turned fatal, an advocate has moved the Bombay high court seeking directions to the Directorate General of Civil Aviation (DGCA) and Airports Authority of India (AAI) to stop using Runway 9, the main runway, till the RESA (Runway End Safety Area) is in place and the non-frangible (i.e unbreakable) jet blast shield (JBS) is dismantled at the other end of the runway.

S. Mangala, the DGM, had said that the flight would have gone up in flames had it overshot the runway on the other side, due to the due to absence of RESA and the non-frangible shield there.

The motion further urged the court to direct the MIAL to remove the non-frangible JBS at one end of the runway and ensure that the RESA is in accordance with ICAO norms and to install an alternative localiser in the place of the JBS, to perform the same function.

The motion has sought directions to the DGCA to name the officer who will be inspecting the RESA and removal of the non-frangible objects so as to increase accountability.

Speaking about the notice of motion, Mr Shenoy said that while there were no casualties in the September 19 incident, a disaster was waiting to happen and the same had been confirmed by the DGM too.

“Ms Mangala has pointed out the flaws in Runway 9 on numerous occasions and after the SpiceJet incident she even said that the outcome could have been worse had the flight overshot the runway on the other side where there is no RESA and a non-frangible JBS,” said Mr Shenoy.