The police’s probe has revealed that Mr Chennar was on the bridge near the staircase when the stampede took place. 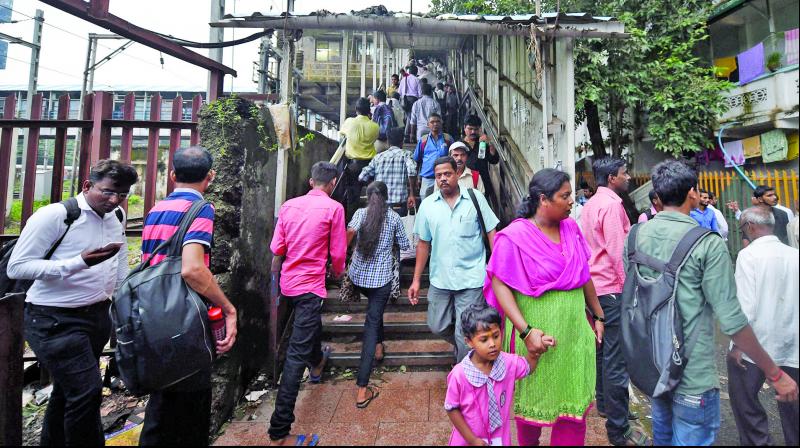 The police has sent summons to the RPF constable asking him to appear for recording his statement.

Mumbai: The Dadar police probing into the Elphinstone Road stampede is waiting for the lone Railway Protection Force (RPF) personnel who was on duty at the spot of the stampede to turn up for recording his statement. The police has sent summons to the RPF constable Chennar, asking him to appear for recording his statement. However, Mr Chenar is yet to appear before the Dadar police.

The police’s probe has revealed that Mr Chennar was on the bridge near the staircase when the stampede took place. However, there was no reaction or response from him. The Asian Age had first reported, on Tuesday, of the CCTV camera on the fateful bridge capturing the RPF personnel (Chennar), who stood without reacting minutes before and after the incident. “We have summoned all the RPF personnel including the one seen in the footage of the CCTV camera on the bridge, to record their statement. He is however yet to make himself available,” said Sunil Deshmukh, assistant commissioner of police, (Dadar).

The railway’s probe committee has summoned all the railway staffers for questioning to ascertain the lapses on the part of authorities. The police is probing negligence on the part of the railway authorities and have found that stationmaster Anil Gupta, who had the CCTV footage monitoring screen in his cabin, allegedly did not quickly to deescalate the swelling crowd on the bridge.

In his statement to Dadar police, Mr Gupta claimed that monitoring the footage was the RPF’s mandate. Mr Gupta further added that the booking staff informed him about the incident, only after it had unfolded.

Investigators claimed that Mr Chennar, who was on the bridge neither acted nor informed the controlroom about the overcrowding on the bridge. He also did not communicate with the stationmaster after the stampede. The police has recorded statements of eyewitnesses who were present near the bridge including survivors who were caught in the crowded FOB.