Voting is scheduled to take place on October 21, and counting of votes on 24th. 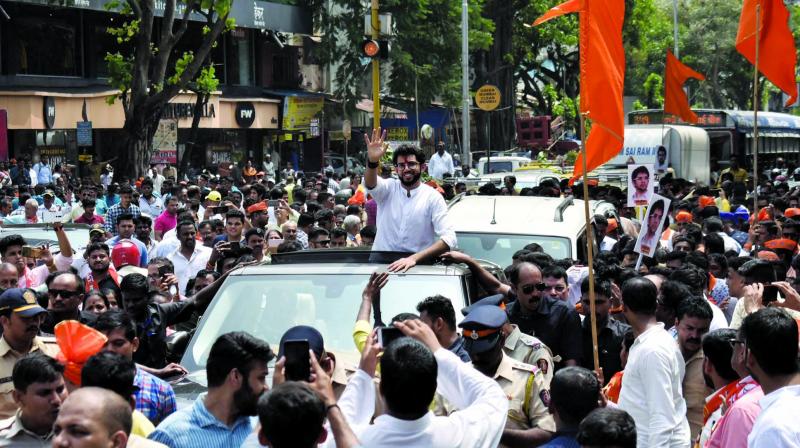 Shiv Sena president Uddhav Thackeray’s son and Yuva Sena chief, Aaditya is the first and only member of the Thackeray family to contest an election ever since his grandfather Balasaheb Thackeray founded Shiv Sena.

The roadshow witnessed thousands of people holding party flags and chanting slogans in his favour. Voting is scheduled to take place on October 21, and counting of votes on 24th.

Aaditya, 29, declared assets of `16.05 crore while filing his nomination papers. The affidavit mentions agriculture land worth `77.66 lakh and two shops worth `6.89 crore, which, he claims, were gifted to him by his father and mother, Uddhav and Rashmi Thackeray, respectively.

While Uddhav and Rashmi did not join his motorcade, they accompanied their son — first member of the Thackeray family to contest an election — while filing his nomination papers.

In his election affidavit filed before the Election Commission, Aaditya described his profession as “business”. Of the total assets of `16.05 crore, bank deposits account for `10.36 crore of his `11.38 crore moveable assets, whereas immovable property accounts for `4.67 crore.

His listed assets include a BMW, whose current value was put at `6.50 lakh, and jewellery, which include diamond and gold bracelets worth `64.65 lakh.

Speaking at the Worli election office, Sena president Uddhav Thackeray said that he was confident of his son’s victory. “My father used to say that he wouldn’t contest polls. I also say that I won’t contest elections. But this is the new generation, which will take the state forward,” he said and added that Aaditya will not just serve the people of Worli but those of the entire state of Maharashtra.