A senior official from the state’s publicity department said the government was aware of the images being shared. 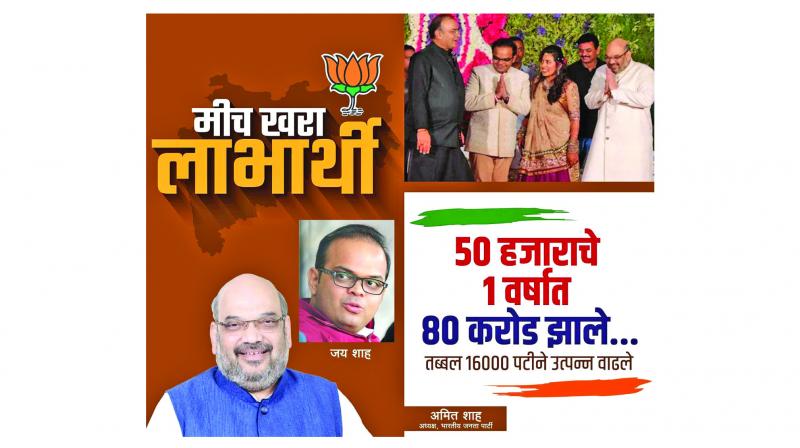 Mumbai: The state government’s decision to commemorate its three years in office by releasing photographs of beneficiaries of government schemes was scorned by netizens, after pictures of Bharatiya Janata Party (BJP) leaders facing allegations for their involvement in various scams went viral on social media on Friday. The BJP-led state government, which turned three on October 31, has used a ‘mi labharthi’ (I am the beneficiary) tagline to publicise its various schemes with photos of beneficiaries.

On Friday, the social media was abuzz with the coordinated release of photographs depicting BJP minister Prakash Mehta, Pankaja Munde, Vinod Tawde; rebel Congress leader Narayan Rane and Sena’s Subhash Desai as the real beneficiaries of the government. Allegations against all these leaders accompanied the photographs. Opposition leaders quickly shared these images on social media. NCP’s Chitra Wagh put those on Twitter, followed soon by NCP MP Supriya Sule and other senior members of the party. The pictures went viral first on WhatsApp and Facebook also.

A senior official from the state’s publicity department said the government was aware of the images being shared. “No political party has claimed that the photos were circulated by them. I think it is a political issue and administration should be kept out of it.”

Congress spokesperson Sachin Sawant also slammed state government. “In those photos published by the government, they have shown a road from Bangkok as the one from Maharashtra. It seems just like in Gujarat and Madhya Pradesh, ‘vikas’ has gone crazy here as well,” Mr Sawant said.  “The government is suffering from a disease called pathological lying. It has been using fancy taglines to prove that it has worked for people. It is hell bent on spending government money on advertising than on doing actual work,” he said.