Attempts made to trace it: dept

Tigress Avni had allegedly killed 13 persons in the Pandharkawada forest in Yavatmal. 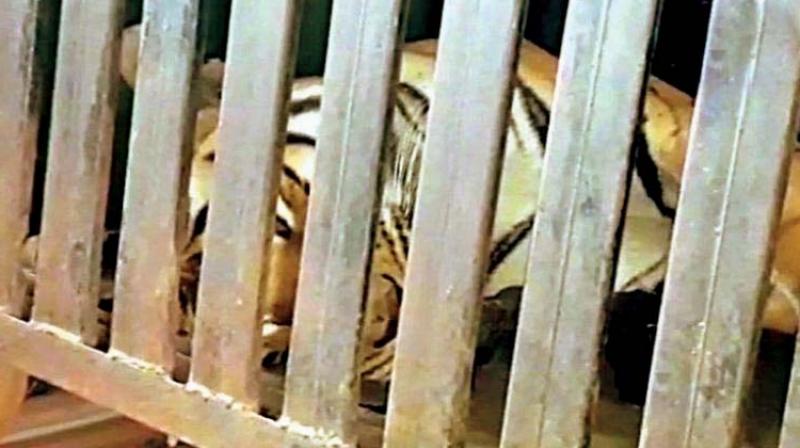 According to official sources, the menacing T1 tigress was killed on the spot.

Mumbai: Villagers in and around Yavatmal disrict heaved a sigh of relief when the menacing T1 tigress who claimed about 13 lives so far was finally shot dead late last night by a sharp shooter.

The tigress, for which the search operation was launched on September 12, was sighted in compartment no. 149, Borati-Warud road in Yavatmal district.

The T1 tigress Avni, that had allegedly killed 13 persons in the Pandharkawada forest of Yavatmal district of Maharashtra, was being hunted for the last two months. The Maharashtra forest department has stated that several measures have been taken to find the tigress since last four months, and the decision to tranquillise or shoot the tigress was taken on August. A team of around 100 officers from the forest department were deployed to make sure that the tigress and her two cubs do not stray in the nearby villages again.

“We had also used more than 100 camera traps to trace the tigress. We had also released sniffer dogs since last three months to find both the tigress and her cubs. Drones and expert trackers were also included in our operation to find the tigress,” said a senior official from the forest department.

To lure the tigress, urine of another tigress and perfume was used in the compartment, near which she was sighted earlier. The tigress reached the site by sniffing it. The tigress was survived by two ten months old cubs. However, wildlife activists fear that the cubs will now have to spend the rest of their lives in captivity.

The post-mortem of the tigress is in progress. In October, an elephant that was part of a group hunting a man-eating tigress in Maharashtra ran astray overnight and trampled a woman to death.