Members want the property files to be digitised on priority basis. 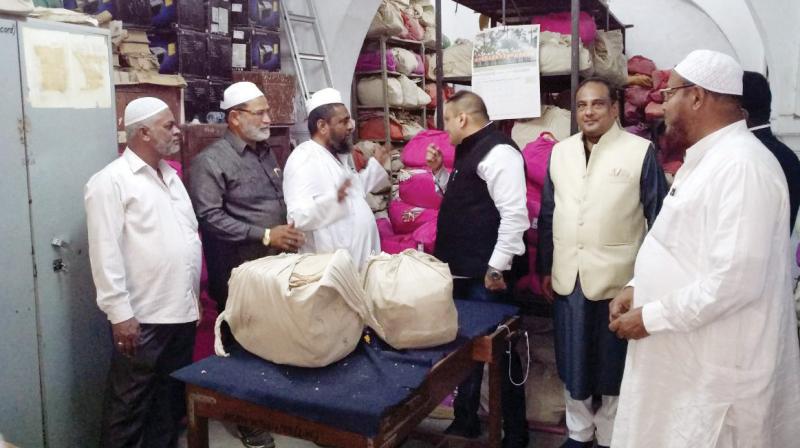 Members of the Waqf board head office in Aurangabad show the bundles in which all property files are kept.

Mumbai: The newly-appointed member of the Maharashtra Waqf Board, advocate Khalid Babu Qureshi, has written to the government seeking the upgradation of the Waqf Board’s head office in Aurangabad, which is allegedly in shambles.

Mr Qureishi sought the state’s help after he visited the head office and found that the files stored there related to its properties were not being maintained properly as a result of which records of nearly 1 lakh acre of land under the board in the state could be lost.

Mr Qureishi said there is an urgent need to digitise the records which has proof of how much Waqf land has been usurped by politicians and private bodies.

Mr Qureshi said that files were stored in bundles rather than sorted on shelves for safe keeping. He further added that the staff also informed him of leaking roofs due to which the files and records were getting damaged.

“All records and important documents pertaining to the properties under the Waqf board are kept at the head office. However, due to the pathetic conditions, there is a high possibility of the documents getting damaged and lost forever. There is an urgent need to digitise the records as they are the only proof of the Waqf properties. If lost it will become impossible to ascertain which properties have been usurped,” Mr Qureshi said.

He said that he had informed the ministry of minority affairs about the same and had made suggestions to revamp the office.

Mr Qureshi also mentioned about the shortage of staff. Although 60 posts are sanctioned, currently, the board has only 37 staff members.