Along with Mr Tawde, party leader Ram Shinde and MLA Babanrao Lonikar, too, met Pankaja at her residence. 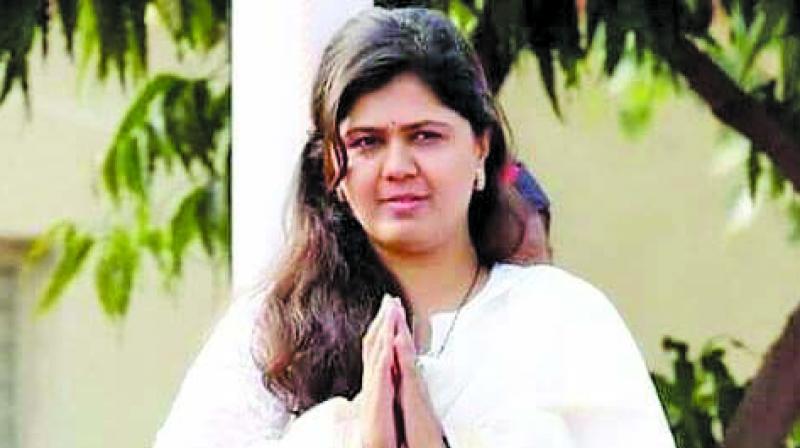 Mumbai: The Bharatiya Janata Party (BJP) on Tuesday went into an overdrive to placate its prominent OBC leader Pankaja Munde. Senior leader Vinod Tawde met the former minister at her residence amid reports of her disillusionment with the party after suffering a shock defeat in the Ass-embly polls. Meanwhile, Pankaja has made it clear that she is not quitting the party.

Along with Mr Tawde, party leader Ram Shinde and MLA Babanrao Lonikar, too, met Pankaja at her residence. “Her Facebook post on Sunday was distorted by the opponents. Hence she was deeply hurt. She informed me that she is not unhappy with the party,” Mr Tawde said.

Pankaja, too, said that the reports of her leaving the BJP were mere rumours. She also denied the rumours that her act of removing ‘BJP’ from her Twitter bio was an attempt at putting pressure on the party to give her an important post. “I am the loyal worker of the BJP and I will not quit the party,” she said.

Earlier in the day, she paid tributes to India’s first President Rajendra Prasad on his birth anniversary on her Facebook page and also posted an image of ‘lotus’ (BJP symbol) along with it. The ‘About’ section of her Facebook account also mentioned BJP as her political affiliation.

On Monday, Ms Munde had removed all details from her Twitter bio, including the word ‘BJP’ and description of her political journey.

On Sunday, she had put up a Facebook post calling for a meeting of her supporters on December 12, which is also the birth anniversary of her father Gopinath Munde. If Pankaja eventually quits the BJP, it will come as a big jolt to the party, which is already reeling under the shock of losing power. Pankaja, daughter of BJP heavyweight leader late Gopinath Munde, has a considerable clout among the OBC communities.

In the Vidhan Sabha polls, Pankaja, who served as the women and child development minister, tasted defeat from the hands of her cousin, Dhanajay Munde. There were reports that some elements in the party worked hard to ensure her defeat in the poll.