Terming it as the biggest bandh ever, NCP spokesperson Nawab Malik said that the movement is against the BJP government. 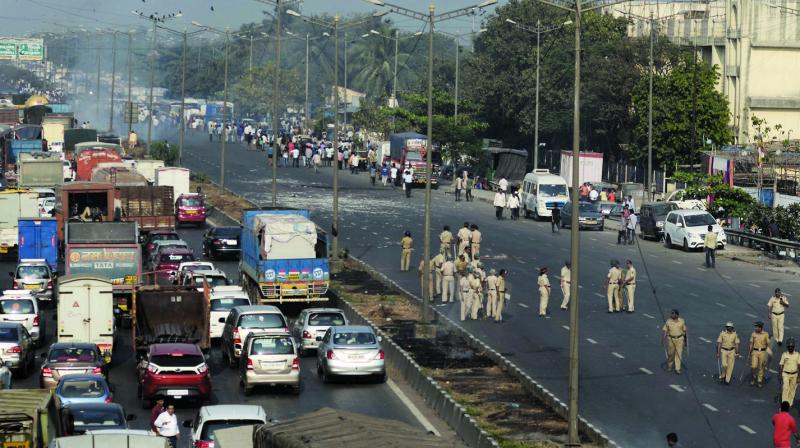 File image of the disruption caused on city highways.

Mumbai: The successful bandh organised on Wednesday by Dalit organisations to protest against the violence in Pune on the bicentennial anniversary of the Bhima-Koregaon battle has hinted at a major change in Maharashtra politics in the coming days. The consolidation of the Dalit community and other like-minded parties against Hindutva forces has posed a serious threat to the ruling BJP’s vote bank that catered the party in the 2014 polls. The opposition Congress and NCP are hopeful to get their vote bank back, as the protesters were angry with BJP.

The bandh in Maharashtra just showed that the community is not happy with the ruling party and have a feeling that they are being ignored, retired professor of politics from Mumbai University, Dr Surendra Jondhale said. “Consolidation of Dalit factions and other leftist groups is the beginning of the emergence of the third front in Maharashtra. In the last three years, there was only a single ruling party and Shiv Sena was playing both ruling as well as opposition party’s role. There was a strong feeling among the Dalits against BJP and RSS. The suicide of Rohit Vemula, flogging of Dalits in Una and now Bhima Koregaon attack have become symbols of dalit oppression by the right wing forces,” Dr Jondhale said.

Terming it as the biggest bandh ever, NCP spokesperson Nawab Malik said that the movement is against the BJP government.

Bharip Bahujan Mahasangh leader Prakash Ambedkar has already announced his war against Hindutva forces. He has even warned the Hindutva forces against dividing people on the caste line.

“Communication has started again between Marathas, OBCs and Dalits which was absent in the last few months. Dialogues among Maratha, OBCs and Dalits will prevent rift on the caste line. However, a few are trying to twist the matter and they should be warned,” he added.