The Shiv Sena, MNS appealed the state to save the anti-corruption activist’s life. 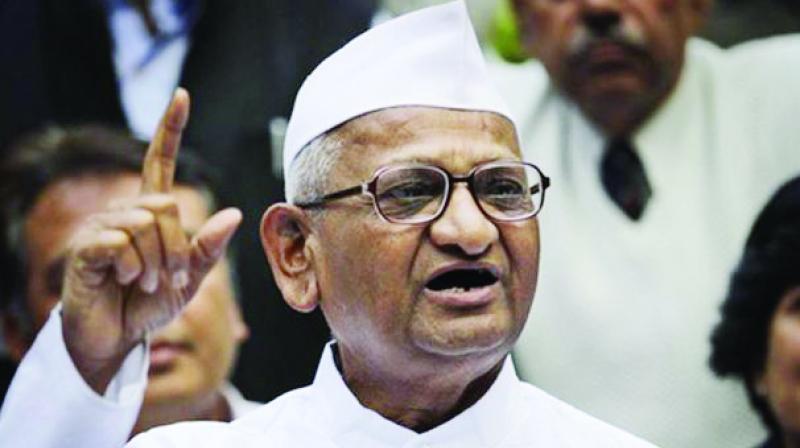 Mumbai: Social activist Anna Hazare has lost 4.25 kg in the last six days since his fast over appointment of anti-corruption watchdogs began, doctors said Monday. Expressing concern over social activist Anna Hazare’s health, the Shiv Sena and MNS Monday appealed the BJP-led government to save his life even as his hunger strike entered its sixth day.

The 81-year-old anti-graft crusader has been on a hunger strike in his native Ralegan Siddhi village in Ahmednagar district, demanding appointment of anti-corruption watchdogs at the Centre and in the state and resolution of farmers’ issues.

“Mr Hazare now weig-hs 71.1 kg and has lost 4.25 kg weight. His blood pressure is also increasing due to fasting,” said Dr Dhananjay Pote, who is attending to Mr Hazare. Dr Pote has been asked by the villagers to keep tabs on Mr Hazare’s health and come up with a daily report.

Sena chief Uddhav Thackeray had extended his support to Mr Hazare, asking him to emulate socialist leader Jayaprakash Narayan and lead an agitation against corruption.

The Sena, in an editorial in party mouthpiece ‘Saamana’ on Monday, appealed to the BJP-led government to save Mr Hazare’s life. Mr Hazare had earlier warned that if the Modi government did not fulfill its promises, he would return his Padma Bhushan award.

MNS chief Raj Thackeray and water conservationist Rajendra Singh met Mr Hazare Monday and extended their support to his agitation. Mr Raj asked Mr Hazare not to sacrifice his life for the ‘useless’ government. He asked Mr Hazare to end his protest and conduct a joint tour of the state with him to ‘bury’ the BJP-led government.

“I have appealed Mr Hazare not to sacrifice his life for these useless people. I have also asked him not to trust Prime Minister Narendra Modi and any of his promises,” Mr Raj said after he and Mr Hazare held a closed-door meeting at the Yadavbaba temple for 20 minutes.