Though residents of the Kranti Nagar slum have been assured permanent rehabilitation every monsoon for years, the residents continue to suffer. 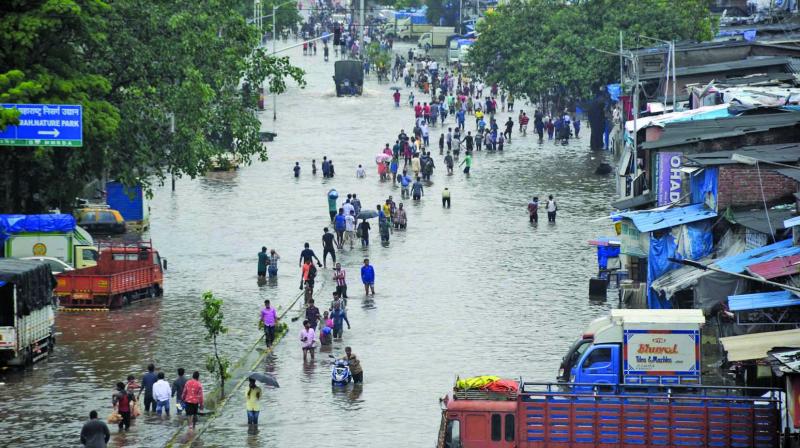 People wade through the water after a heavy rain fall at Sion-Kurla LBS Road on Sunday Mumbai. (PHoto: Rajesh Jadhav)

Mumbai: Around 400 people residing along the Mithi River in Kranti Nagar, Kurla, were shifted to nearby civic schools on Sunday after the river’s water level crossed the danger mark and floodwater entered their houses in the wake of heavy rainfall, a Brihanmumbai Municipal Corporation (BMC) official said.

Though residents of the Kranti Nagar slum have been assured permanent rehabilitation every monsoon for years, the residents continue to suffer.

The Mithi had overflowed at Powai and Marol on Saturday, leading to severe flooding in residential areas. The river, which starts from Tulsi lake and ends at Mahim creek and flows through the Kurla, Sakinaka and Powai, is Mumbai’s biggest stormwater drain and the deluge of July 26, 2005, was caused by its overflowing.

Due to heavy rainfall, a landslide occurred at 7.45 am on Sunday morning in Goregaon’s Dindoshi, injuring a family of four.

The victims, Mohamad Shaikh (15), Ahmed Shaikh (14), Abdul Shaikh (42) and Zubeida Shaikh (70), who were taken to Jogeshwari’s trauma care hospital, are said to be stable.

The National Disaster Response Force (NDRF) on Sunday morning deployed eight teams to tackle rain-related situations in Kurla and Parel in Mumbai, Khadavli, Shahad and Kalyan in Thane district, Pen in Raigad, Kamshet, Hinjewadi/Mulshi in Pune and Chandori in Nashik.

Considering the rising number of complaints of people being stranded, the Maharashtra government sought the help of six more NDRF teams.

An Mi 17 helicopter of Indian Air force (IAF) was dispatched from Santa Cruz around 1.55 pm to rescue residents in Khadavli village. Around 58 villagers, including 16 children, were ferried to India Air Force station at Thane, defence spokesperson Mehul Karnik said.

Three Navy rescue teams were also in touch with the state administration and prepared to render any help required, he said.

Two columns of the Army, comprising 120 personnel, were also deployed for rescue operations in Thane. The Air Force also succeeded in rescuing 59 residents from Ju village near Khadavli, which was completely inundated. The victims were successfully brought to the base camp in Kolshet at Thane (west).

In the evening, another helicopter was launched from Santacruz for Palghar district’s Buranda village to rescue 15 stranded people. However, it returned after the victims could not be located. Co-ordination and search operations could not take place due to heavy rains and poor visibility

An NDRF team rescued a cow at Kamshet village in Pune. Earlier, an NDRF team had also rescued a family of seven in the same village. The teams also rescued residents of Kanhe village of Raigad. Around 45 people from flood-affected Mori village, Bhoidapada in Vasai, who were stranded in their homes, were also rescued.

— With inputs by Deepak Kurkunde