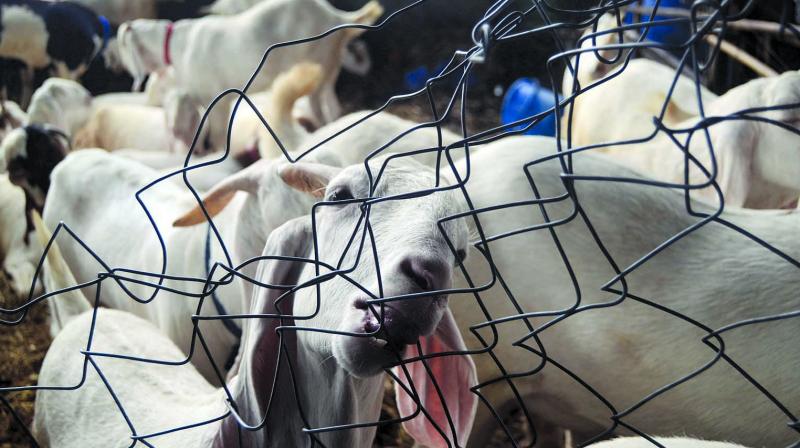 Ahead of the Bakri Id festivities this month, the Bombay high court has suggested measures to tackle illegal transport of animals for slaughter.

Mumbai: Ahead of the Bakri Id festivities this month, the Bombay high court has suggested measures to tackle illegal transport of animals for slaughter.

While asking the Brihanmumbai Municipal Corporation (BMC) to prevent the slaughter of animals in residential societies, the court also hoped that creating awareness via social media could help prevent animal slaughter.

“We hope and trust that slaughtering animals in closed areas, particularly in flats and homes, could be prevented by not only penal measures, but also through awareness campaigns on social media,” the division bench comprising Justice S.C. Dharmadhikari and Justice Sandip Shinde said.

The hearing on the case will continue on Monday. The division bench was hearing a bunch of petitions filed by Jeev Maitri Trust — a South Mumbai-based trust — and others against the civic body’s policy of issuing temporary permits to kill animals in residential societies during festivals.

BMC counsel Anil Sakhare informed the court on Friday that the civic body had made a foolproof policy for animal slaughter during festivals. Mr Sakhare added that the BMC was also ready to accept rational suggestions of the petitioner.

During the course of the hearing, the high court observed that suitable measures could be taken against those transporting the animals for slaughtering, while stressing on co-ordination between the police and the municipal machinery.

While noting that there are several entry points through which these animals are brought to the city, the court added, “Escape routes are chosen by animal transporters to avoid check points like toll plazas. There is also the freeway via which one can enter central suburbs like Chembur, Kurla, Byculla, and Sewri etc. It would be ideal if a joint vigil could be maintained on the freeway as well as the eastern and western express highways”.

The high court also suggested the civic body to start an awareness drive on various social media to highlight the ills of animal slaughter as well as publicise the provisions of the Prevention of Cruelty to Animals Act, 1960.