Santacruz cumulative rainfall on Aug 4 is 2374.2 mm and has crossed the normal seasonal total of Santacruz 2317.1 mm. 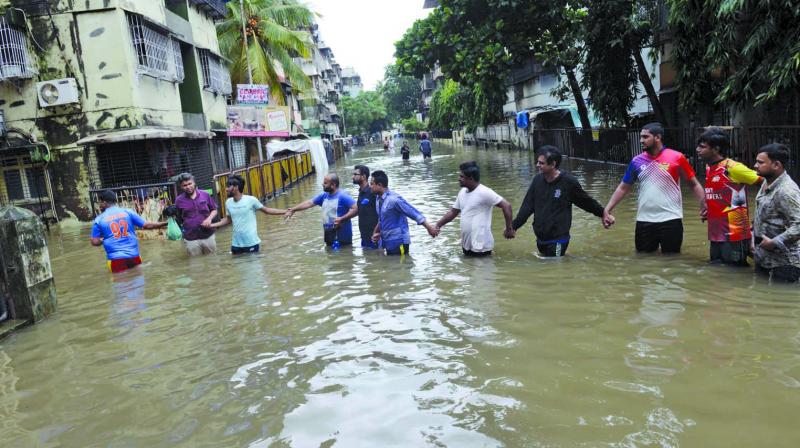 Mumbai: The Mumbai city and its adjoining areas — Thane and Navi Mumbai — reco-rded more than 200 mm of rainfall in the last 24 hours causing flooding in major nullahs and rivers across these districts.

According to the India Meteorological Department (IMD), Malad (west) recorded highest rainfall since 8.30 am on Saturday with over 400 mm of
rainfall.

Areas like Mulund (west) and Powai recorded more than 300 mm of rains during the 24-hour period followed by JVLR, Bhandup (west), Mulund (east) and Kandivali.

The Santacruz observatory recorded 204 mm rainfall, while Colaba observatory recorded 142 mm rains during the same time. The Brihanmumbai Municipal Corporation (BMC) has advised the public against venturing into the sea or in waterlogged areas in view of the IMD warning.

The India Meteorological Department had issued a red alert in the city and predicted heavy rainfall accompanied with gusty winds for Sunday. A high tide of 4.8 metres was expected around 2:29 pm.

“Santacruz cumulative rainfall on Aug 4 is 2374.2 mm and has crossed the normal seasonal total of Santacruz 2317.1 mm. With the sluggish onset in June, monsoon had been very active over Mumbai during July and now in August, trend is continues (sic),” said K.S. Hosalikar, Deputy Director General of Meteorology, IMD Mumbai.

Rains also lashed Nashik, Pune, Raigad and Ratnagiri districts, where water-logging was witnessed in various localities and rivers in full spate. Authorities have declared holiday for schools in Thane, Pune, Nashik and Raigad districts on Monday.

Thane and Palghar districts and Navi Mumbai town have been witnessing incessant rains since the last two days and a number of incidents of tree fall were reported from these localities, an official said.