There will be 26 artificial ponds across the city to facilitate the immersion of idols along with 69 natural immersion centres. 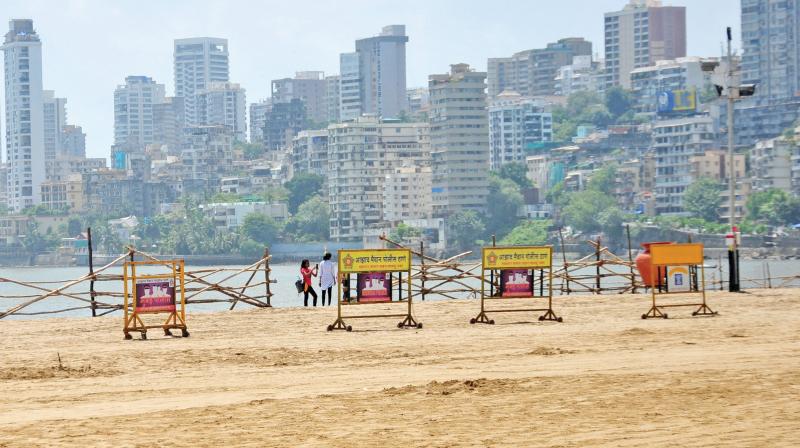 The police has set up watchtowers and is putting up signboards to warn Ganesh devotees not to enter deep waters. (Photo: Debasish Dey)

Mumbai: Having deputed more than 9,000 of its workers throughout the city, the Brihanmumbai Municipal Corporation (BMC) has geared up for the immersion of Ganpati, the city’s favourite god.

According to civic officials, the BMC has provided various facilities at 69 major immersion centres across the city. To ensure that immersion vehicles are not stuck in sand, 840 steel plates have been placed at the Girgaum Chowpatty. In addition to this, 50 German rafts have been made available for the immersion of small idols.

From the security point of view, 400 lifeguards will be deputed at the immersion centres to prevent mishaps. Eighty-one motorboats will also be kept ready, said civic officials. There will be 74 first aid centres and 60 ambulances stationed across the city. The civic body has also provided 58 control rooms and 48 control towers. The BEST has made available 1,991 flood lanterns and 1,306 searchlights at the immersion centres.Eighty temporary toilets will be installed at immersion centres for the convenience of people.

There will be 26 artificial ponds across the city to facilitate the immersion of idols along with 69 natural immersion centres. Keeping in mind the growing response, the BMC has decided to put in place 201 Nirmalya Kalashas to collect floral offerings at immersion centres and 192 compactors and dumpers to carry the Nirmalya. More than 9,000 people have been deputed to ensure that immersion goes off smoothly,” said a senior civic official.

Asked about Tuesday’s climactic conditions, the Indian Meteorological Department’s K.S. Hosalikar said, “A few shower spells that can be expected on Tuesday and over the coming week. As September is the time of withdrawal of the monsoons, a dark cloud resulting in light showers is expected in the current month, with some dark evenings with heavy clouds."

More than two lakh Ganpati idols are immersed during the festival.