Inquiry counters have been set up on bridges to keep commuters updated. 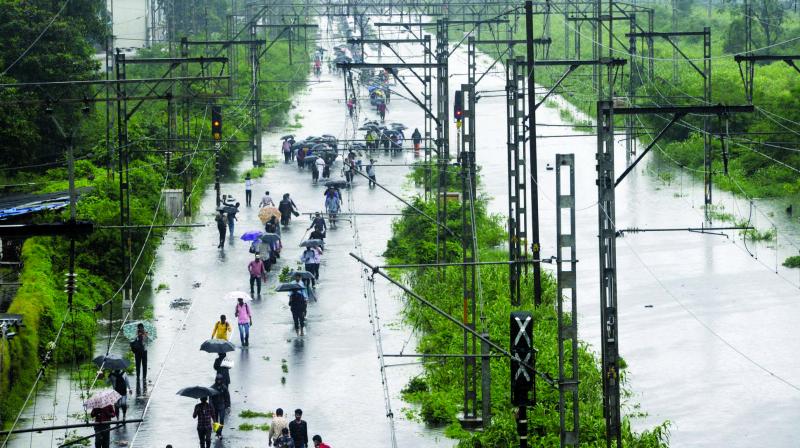 The tracks between Kurla and Vidyavihar. (Photo: Rajesh Jadhav)

Mumbai: Local train services on all three lines — western, central and harbour — were severely disrupted due to incessant heavy rain Wednesday, with train operations remaining suspended till evening. The railway tracks between Sion and Kurla on the central line and between Mahim and Bandra on the western line were inundated.

Both Western Railway (WR) and Central Railway (CR) listed trains on their official Twitter handles that had been terminated/cancelled/rescheduled due to heavy rainfall in Mumbai and the surrounding areas. The railway set up inquiry counters on various station bridges to update commuters about train services.

Chief ticket inspector Milind Dangle said a counter has been set up to inform people regarding the cancellation and rescheduling of trains. “Due to incessant rain in the city over the western section and waterlogging on the tracks at Nallasopara, many long-distance trains of the WR leaving on Wednesday were cancelled. The railway unit on phone gave us a list of trains that had been short-terminated and reversed due to waterlogging in the Virar-Nallasopara section,” he said.

Passengers were stranded at stations due to waterlogging. Hetang Doshi (37), a passenger, said, “My train is late and we weren't sure about this but the information desk provided us information and thus, we are waiting at Dadar station since morning.”

Another passenger Purvi Joshi said, “My grandmother is unwell and I need to see her but the entire central line has been disrupted. We are waiting for the train but we have no clue when the train will come. We hope things will get better and train services will return to normalcy.”

The CR said that waterlogging on tracks led to cancellations and hence, opened refund counters at all reservation offices.

Meanwhile, flight operations to and from Mumbai International Airport were affected due to low visibility. An airport official Wednesday morning said, “Operations are so far normal with minor delays of 10 to 15 minutes.”