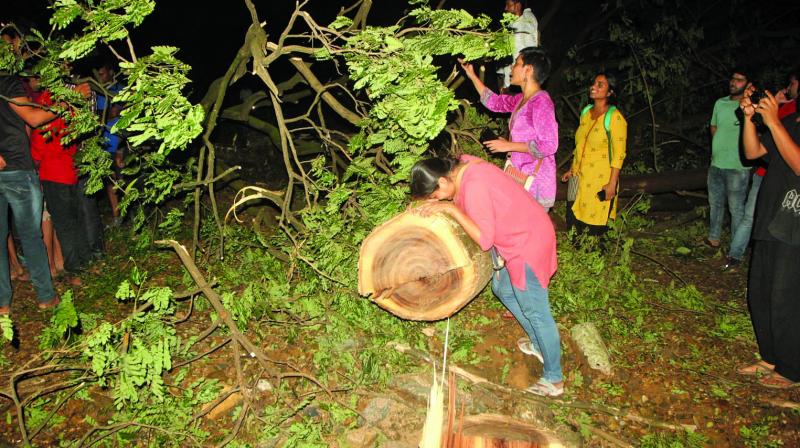 Activists protest against the axing of trees at Aarey Colony that occurred in the wake of the Bombay high court dismissing all petitions opposing the metro car shed there.

The proposed car shed, part of the Metro 3 corridor, will occupy 33 hec-tares of land in the southern part of the colony. The authority has approved the felling of 2,185 trees and transplantation (uprooting from the original spot and replanting them at an alternate spot) of 461 others in the area. The authority’s approval is mandatory for felling more than 20 trees at a time at any place in the city.

After the video surfaced, Congress leader Jignesh Mevani tweeted an appeal to the people of Mumbai to resist the “illegal” action.

“Urgent request to Mumbaikars: Authorities have already started cutting trees in Aarey after the order passed by the BHC today. Citizens are reaching Aarey forest to stop this. I request Mumbaikars to reach and resist this move right now (sic),” he tweeted.

Actor Dia Mirza also tweeted, “Isn’t this illegal!?! This is happening at #Aarey right now. Why? How? (sic)”

The high court has dismissed all petitions opposing the metro car shed at Aarey Colony and declined to quash the civic body’s tree authority’s decision allowing the felling of over 2,600 trees in the green zone to set up the depot. The court also refused to declare Aarey a forest or part of Sanjay Gandhi National Park.

“The greens (environmentalists) fail in the instant petition because they have lost touch with the procedure to be followed as per the law. The clock cannot be put back. We do not make any comments thereon as the petitioner has to now swim or sink before the Supreme Court,” the court said.