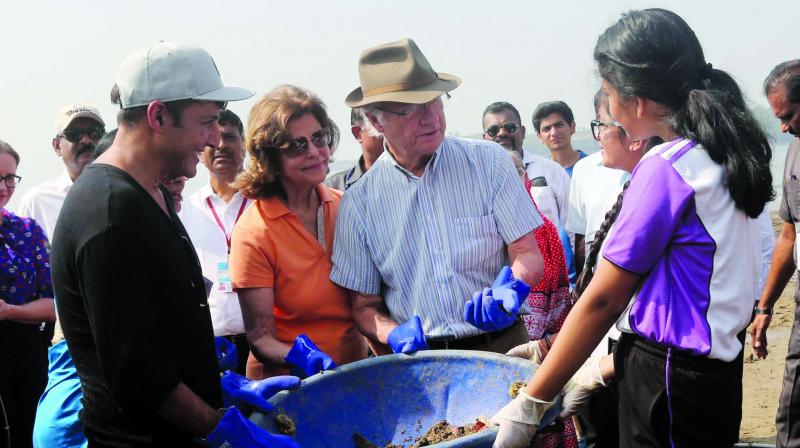 The Swedish royal couple helping the volunteers in cleaning the beach. (Photo: AA)

The royal couple visited Versova beach and participated in a clean-up drive undertaken by well-known environmental activist Afroz Shah. The royal couple also took some time out to interact with volunteers participating in the drive. The Versova beach clean-up gained worldwide prominence after Mr Shah successfully transformed the once filthy and cluttered beach into a clean and tidy one in a span of just two years.

An elated Mr Shah said, "The visit of the royal family gives out a very important message. If the Swedish royal family can do it, anyone can contribute towards making our beaches plastic-free. Beach clean-ups are not easy. There is lot of hand-to-hand collection of trash. That is what their majesties also did.”

Mr Shah, who was recently named in CNN’s Top 10 Heroes of 2019, pointed out that beach clean-ups are not just about cleansing beaches of plastics but also about protecting marine species from plastic and other wastes that harm them.

They also visited the Doorstep school, a non-profit organisation that provides education to underprivileged children and has reportedly helped educate more than 50,000 children thus far.

The royal couple also attended a workshop on coding and engineering for girls and visited the Hotel Taj, where they offered tributes to the victims of 26/11 attacks.