The residents blamed illegal stocking of chemicals and other flammable liquids for the eruption of the fire. 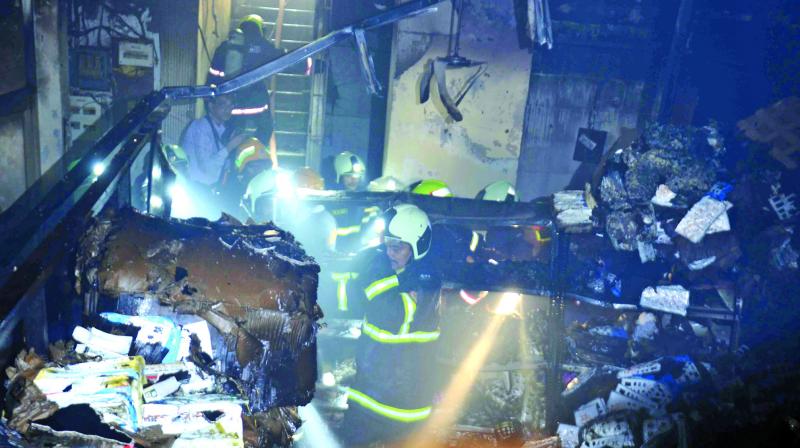 In the basement of Zia Apartment. (Photo: Rajesh Jadhav)

Mumbai: In yet another fire mishap in the city, a massive blaze gutted the basement of Zia Apartment, a six-storeyed residential building in Nagpada in the noon on Friday. The blaze allegedly erupted in three godowns in the basement. The basement was allegedly being used for commercial activities like mobile repair shops and a garment manufacturing workshop. However, no casualties were reported as labourers were not present when the fire broke out. The store owners had allegedly stored inflammable liquid, claimed residents.

The resident had complained to the fire department in 2013, following which fire officials had directed the ward officers to put a halt to activities in the basement, said sources. The fire department, however, did not follow up on whether the Brihanmumbai Municipal Corporation (BMC) took action against the illegalities in the basement, said sources.

Sahebrao Gaikwad, an assistant municipal commissioner of ‘E’ ward ( Byculla, Nagpada), said, “Our officers have sealed the premises where the commercial work was underway. I have asked junior officers to produce the report of past actions taken against the basement,” he said.

The residents blamed illegal stocking of chemicals and other flammable liquids for the eruption of the fire. The godowns were owned by Shoaib Khan, Gulam Rasul and Zarar.

A letter sent by the Mumbai Fire Brigade to the civic officials in 2013 directed Assistant Engineer (Building and Factory), Senior License Inspector, License Department from the ward may please be requested to visit the premises in view of the complaint, inspect thoroughly and take stern action. Confirming the complaint, a senior fire official said, “Yes, we had received a complaint from Zia society, we had asked ward officers to take suitable action. We did not follow up on it later.”

The blaze started at 12:16 pm on Friday and was confined to three godowns in the basement.