137 tonnes of waste collected in BMC bins in 2 mths

According to civic data, the 137.935 tonnes of plastic was recovered from all the 24 wards of the city. 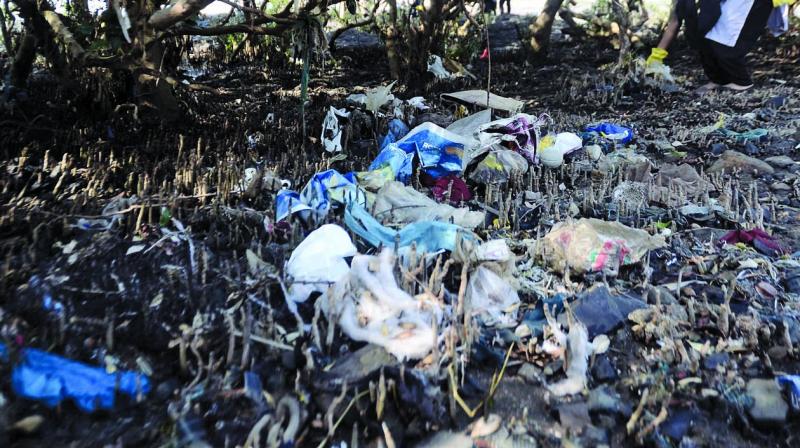 Plastic waste is scattered over a mangrove.

Mumbai: The Brihanmumbai Municipal Corporation (BMC) has recovered around 1,37,935 kg of plastic from collection bins and dry waste collection centres in two months, between April 1 and May 31, since the state enforced the plastic ban on
March 23.

According to civic data, the 137.935 tonnes of plastic was recovered from all the 24 wards of the city. The highest number of plastic was collected from H/W ward with 29,450 kg from dry waste collection centre and 1,010kg from the collection bins. This was followed by D ward (19,575 kg and 391.55kg) and C ward  (16,107kg and 28kg). The least was collected from M/E ward.   “With more than 1 lakh kg plastic collected in last two months, it shows how plastic has become an integral part of our lifestyle, which needs to be self-regulated,” said a senior official from the Solid Waste Management Department, BMC.

As Mumbai gets ready for discouraging single-use plastic, The Asian Age looks at how plastic has become ubiquitous in our life and the amount of plastic recovered from Mumbai's rivers and mangroves. The city’s rivers are affected due to plastic waste, which leads to flood-like situation due to clogging, or ends up in the sea affecting marine life. While the BMC does not have any data on the plastic found in the city's rivers, Rivermarch, a citizens group stated that 2 lakh kg of plastic was removed from Poisar river between 2017 and 2018, and Dahisar river has been liberated of 1.25 lakh kg of plastic over 12 cleanliness drives.

“On an average, around 3,000-4,000 kg of garbage mostly consisting of plastic is recovered in one river cleanliness drive when carried out manually. When done with the help of JCBs and other machines, it is around 25,000 kg. The main source of plastic pollution in Poisar river is Krantinagar, where a large rural population dumps plastic into the river. We have time and again carried out awareness drives in these areas, but there is also lack of garbage collection here. We have been asking for provision of dustbins in these areas since last 23 weeks, however, there has been no action by the BMC,” said Gopal Jhaveri, member of River March. Meanwhile apart from rivers, but around 8 lakh kg of plastic was found in the city's mangroves during cleanliness drives carried out by the forest department between December 2017 and March 2018.

Meanwhile, environmentalists also believe that stricter implementation of Solid Waste Management Rules 2016 is the need of the hour.

“The first step towards combating plastic pollution is segregating waste at your home. While cleanliness drives are appreciated, in my letter to the BMC chief I have highlighted how dumping of garbage in our city’s rivers should be stopped at the source,” said Rishi Aggarwal, a solid waste management expert.