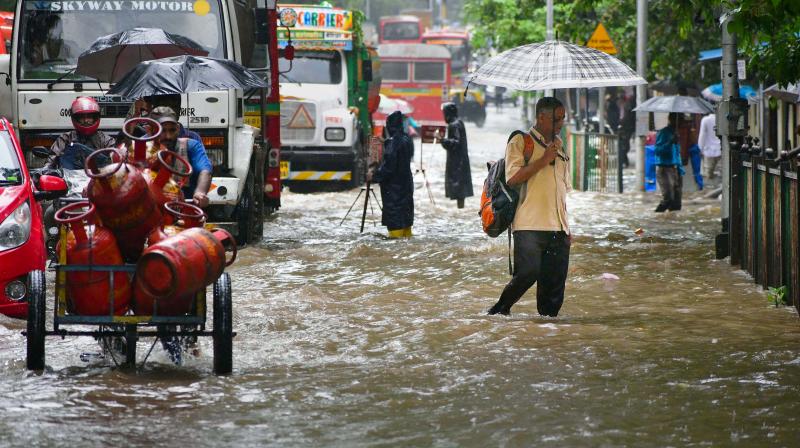 Commuters wade through a waterlogged road following Monsoon rains, in Mumbai, Tuesday, July 5, 2022. The IMD, Tuesday issued a heavy rainfall alert for Maharashtra over the next four days. (PTI Photo)

Mumbai: Incessant rainfall was reported in Mumbai on Wednesday morning, after spells of heavy showers over the last two days, and citizens complained of water-logging in some low-lying areas of the city.

An aggrieved citizen in a tweet said they now need a boat to commute, instead of a car.

The Central Railway and Western Railway officials said the local trains were operating normally, but some commuters claimed the suburban services were running a little late.

Mumbai is likely to witness another wet day as the India Meteorological Department (IMD) has predicted moderate to heavy rain in the city and suburbs, with a possibility of extremely heavy rainfall at isolated places in the next 24 hours, according to civic officials.

In the 24-hour period ending at 8 am on Wednesday, the island city (south Mumbai) received an average 107 mm rainfall, while the eastern and western suburbs recorded 172 mm and 152 mm downpour, respectively, a civic official said.

Some low-lying places like Hindmata, and areas in Dadar and Sion, including the Gandhi Market and road number 24 in Sion, were inundated, forcing pedestrians to wade through the water and making it difficult for motorists to commute.

"Flooding in Sion, Matunga, Dadar. Need a boat instead of car to commute," a city resident tweeted.

Some buses were diverted due to water-logging in Sion and Gandhi Market, according to sources.

The BEST Undertaking spokesperson did not respond to a query on bus operations in the city.

A Western Railway spokesperson said "trains are running normally" on their suburban network.

The Central Railway's chief public relations officer Shivaji Sutar in a tweet said, "Train Alert! 9.30AM Trains on all corridors are running."

On Tuesday, heavy showers in Mumbai and its adjoining areas caused water-logging at a number of places, including railway tracks, which had led to train delays and affected vehicular movement on roads.

Chief Minister Eknath Shinde had on Tuesday directed state administration officials to take necessary precautions and ensure there was no loss of life or damage to property.