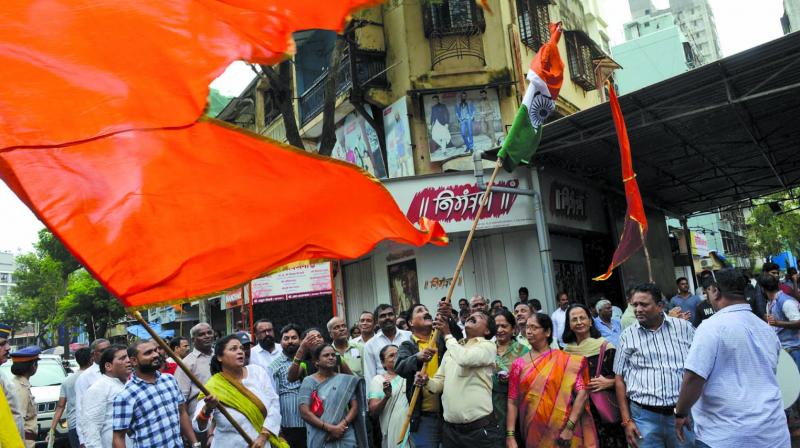 Mumbai: The Shiv Sena on Monday welcomed the Centre’s move to revoke Article 370 of the Indian Constitution, which grants special status to Jammu and Kashmir.

While party chief Uddhav Thackeray remarked that India had become independent in the true sense, his son and Yuva Sena chief, Aaditya said that the move would help lay the path for a safer and prosperous Jammu and Kashmir.

Uddhav, whose party has been a vocal critic of the contentious Article, also asked the Opposition parties to keep away their political differences and support sovereignty of India.

Meanwhile, Aaditya took to Twitter to express his gratitude towards Prime Minister Narendra Modi and home minister Amit Shah. “I pray that now with the reorganisation of Jammu, Kashmir & Ladakh, the citizens there will benefit with peace, progress and prosperity, which was being held back from them for years due to its isolation from the rest of the country (sic),” one of his tweets read.

Chief minister Devendra Fadnavis said the Centre’s decision to abolish Article 370 had foiled the attempts of Pakistan and the Congress government to separate the state from India.

Speaking in Chandrapur during the Maha Janadesh Yatra, Mr Fadnavis said that the Prime Minister as well as the home minister must be congratulated for their ‘benchmark decision.’

The Kashmiri Hindu community in Mumbai too welcomed the move to scrap the contentious Article of the Constitution.

Kashmiri Pandit activist and filmmaker Ashoke Pandit said that he felt unchained from the shackles of Article 370 and 35A.

A displaced Kashmiri Pandit, now settled in Maharashtra after fleeing the valley decades ago, said he was overjoyed with the decision.

“This day has come after 70 long years. Years of torture, denial of services and facilities, unsafe life, limb and habitation and denial of access to education, jobs and businesses in Kashmir to those like us,” he said.

Mr Kher, said that he had woken up to the best news of his life. That the announcement took place on the day of the release of his autobiography was a gift, he added.

Fellow actor Paresh Rawal, a former BJP MP, tweeted that the country had become one in the truest sense of the word on Monday.