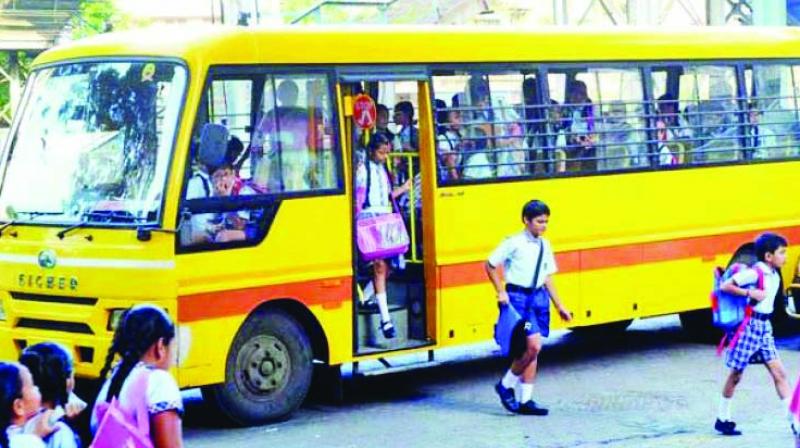 The state also argued that, in 2017, it had passed ammendments in Motor Vehicles Act, which is pending before the President for approval.

Mumbai: The state government on Wednesday informed the court that autorickshaws and vehicles with less than 13 seats would also be considered school vehicles even though it is against the Central Motor Vehicles Act. The state argued before the high court that every school couldn’t afford school buses and provide a parking area for them. But before giving the permit, the transport department would check safety measures in autorickshaws. The state also argued that, in 2017, it had passed ammendments in Motor Vehicles Act, which is pending before the President for approval.

A division bench headed by Acting Chief Justice Naresh Patil was hearing a public interest litigation filed by the Parents Teacher Association (PTA) United Forum seeking directions to the state government to ensure proper implementation of the school bus safety norms as laid down by the Centre in the Motor Vehicles Act of 2012.  The petition stated that despite rules and guidelines being formulated and a school bus being defined by the Act, the state had been issuing permits to vehicles with less than 12+1 seating capacity.

Earlier, the court directed the state to take action against private school bus owners who don’t follow any safety measures prescribed by the state government. The petitioner stated in the petition that in Andheri more than 2,000 illegal vehicles are carrying school children.

On Wednesday, PTA United Forum informed the court that despite the court directions, small vehicles are still ferrying school children.

Chief government pleader Abhinandan Vagyani informed the court that under the Central government’s Motor Vehicles Act, there is a provision that a state can make its own Act for itself.

He further said that it is impossible to enact the Central government’s provisions practically. It can’t stop parents who themselves decide and book taxis or autorickshaws to ferry their children to and from schools. He also informed the court that some schools couldn’t afford school buses.