They have also demanded an apology from chief minister Devendra Fadnavis. 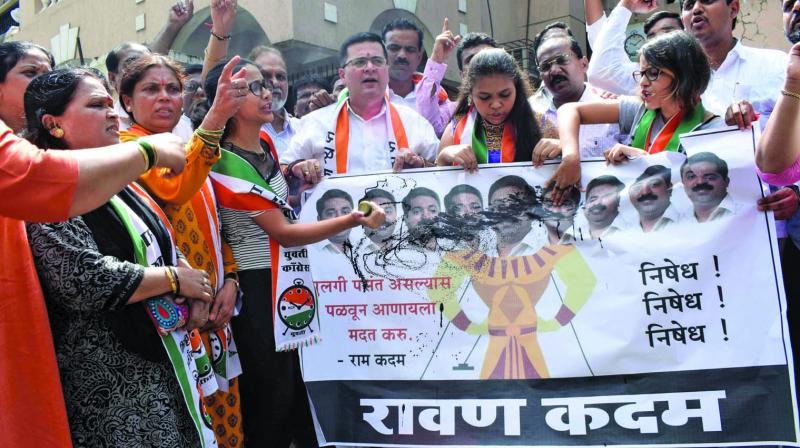 Mumbai: All political parties in the state came out to slam Bharatiya Janata Party (BJP) MLA Ram Kadam on Wednesday following his remarks about abducting a girl on the demand of some young men during the Dahi Handi festival. Shiv Sena chief Uddhav Thackeray demanded that he be sacked and that no party should give him ticket in future. The women party workers of the Congress and the Nationalist Congress Party (NCP) held protests against Mr Kadam across the state. The Maharashtra Navnirman Sena (MNS) put up posters depicting the BJP leader as the mythical Ravan in the city. Even though Mr Kadam has apologised , the opposition is demanding that action be taken against him. They have also demanded an apology from chief minister Devendra Fadnavis.

Reacting to the controversy, Mr Thackeray said, “All political parties should unitedly condemn this statement. Chief minister Devendra Fadnavis should show courage and take action against him.”  The Sena chief also mentioned other BJP leaders, who had made similar controversial remarks. “Prashant Paricharak, Sripad Chhindam, and now this. These people should be punished for their remarks. All political parties must come together and not give a ticket to any of them,” said Mr Thackeray.

Opposition parties demanding action against Mr Kadam, came out on road. Congress youth workers and its women-wing activists held protests across the state. During the Jan Sangharsh Yatra in Indrapur, they burned an effigy of Mr Kadam.  NCP’s women wing tried to hold a protest in front of Mr Kadam’s office in Ghatkopar but were stopped by the police. But they raised slogans against him and the BJP. “Power has gone to their heads. We want strict action against him. Women are not going to listen to such things anymore,” said Chitra Wagh, chief of NCP’s state women’s wing. MNS workers put up posters at Ghatkopar assembly constituency, which had Mr Kadam depicted as Ravan. These posters were put up by the party’s Ganesh Chukkal. “Kadam has defamed the citizens of Ghatkopar.”