While the city has been witnessing torrential rain, five other places in the state, too, have recorded more than 100 mm rain in 24 hours. 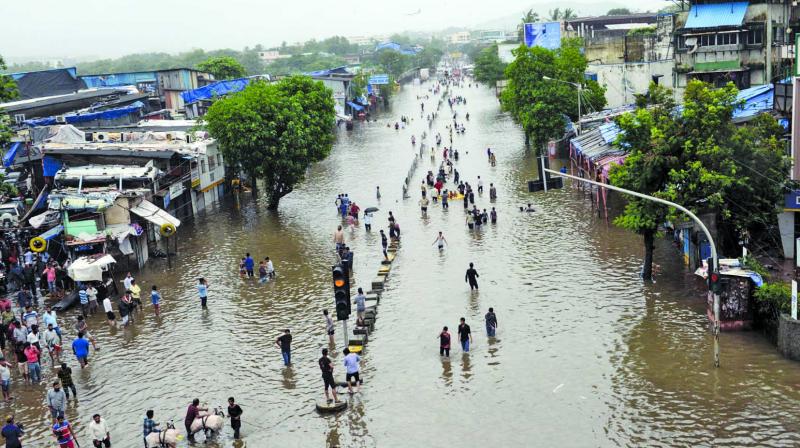 The average seasonal rainfall between June and September is 2,317.2 mm while the average annual rainfall is 2,514 mm, as per IMD data. The Colaba observatory has recorded 2162.2 mm rain from June 1 to September 5. (Photot: Rajesh Jadhav)

Mumbai: Owing to the heavy downpour over the past two days, Mumbai has covered its average seasonal rainfall by September first week itself. The Santacruz laboratory has recorded 3,078.2 mm rainfall from June 1 to September 5, according to the Indian Meteorological Departm-ent (IMD). The intensity of rain will reduce within the next 48 hours, the IMD said.

The average seasonal rainfall between June and September is 2,317.2 mm while the average annual rainfall is 2,514 mm, as per IMD data. The Colaba observatory has recorded 2162.2 mm rain from June 1 to September 5.

“It is just the first week of September and yet, the seasonal monsoon record has been covered. In 2011, the Santacruz observatory had surpassed the average seasonal rainfall,” said KS Hosalikar, deputy director deneral, IMD Mumbai.

While the city has been witnessing torrential rain, five other places in the state, too, have recorded more than 100 mm rain in 24 hours.

Apart from Santacruz receiving 242 mm rain in the past 24 hours, Thane and Matheran have recorded 219 mm and 203 mm rain, respectively, in the same period. Mahabaleshwar (195 mm), Harnai (140 mm) and Alibaug (126 mm) have followed suit.Multiple weather systems are keeping the monsoon surge active along the west coast, according to weathermen.

Strong westerly winds are also blowing along the Maharashtra coast.

“The monsoon surge along the west coast would decrease, but rains would continue in south Konkan, wherein Sindhudurg, Ratnagiri and the adjoining parts of Madhya Maharashtra would witness moderate to heavy rains for the next 24 hours. From September 6, the intensity would taper over the region,” read the Skymet Weather report.

Ganpati pandals provided food and shelter to hundreds of commuters stranded at various railway stations due to incessant rain in the city Wednesday.

One such commuter who stays in Borivali and works at Curry Road, said, “I was stuck in the rain and all Western Railway (WR) services had come to a grinding halt. Along with me, there were many others. The Chinchpokali Ganesh pandal served us tea and biscuits and dinner.”

Sandeep Parab of the Chinchpokali Chintamani Mandal said that the crowds had begun to dwindle from Tuesday itself.

“Devotees were stranded due to the rain. With rain stalling local train services Wednesday, there were hardly any visitors. Luckily, there was no waterlogging inside our mandal. We had constructed a taller stage this time,” he said.

Subash Pai, convenor of the mandal, said, “We provided anna prasadam and requested people to stay with us at our temple due to the rain.”

He said that the mandal was shifting pooja bookings to September 6 as Dadar T.T. and four roads in Wadala were flooded. He suggested using the monorail for darshan. “Last year, our mandal saw 6,000 devotees every day. This year, we have seen only 500 per day.”