Tension continues to simmer in Kolhapur

According to a police officer, internet service has been blocked since Tuesday but was started for two hours on Friday and Saturday. 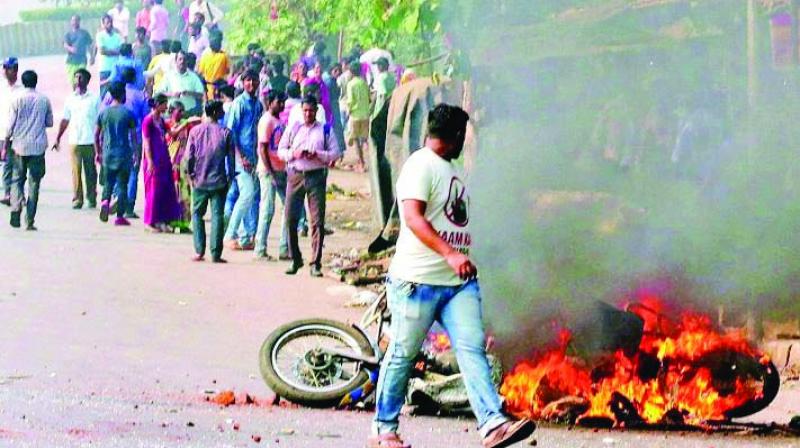 One person was killed in violence at Bhima-Koregaon in Pune district on Monday.

Mumbai: Five days after one person was killed and three others were injured during violence that broke out on Monday at Bhima Koregoan, tension continued to simmer in Kolhapur and its adjoining areas. Internet services remained blocked on Saturday as well to prevent rumour mongering and maintain peace in the region.

According to a police officer, internet service has been blocked since Tuesday but was started for two hours on Friday and Saturday.

Superintendent of Police, Kolhapur, Sanjay Mohite said, “The decision to suspend mobile internet service was taken a day before the state-wide bandh was called. The rumours being spread on social media by rioters were posing a challenge for the city police’s efforts in maintaining the law and order situation. Finally a call was taken to temporarily suspend mobile internet services in the city.”

Kolhapur district collector Nandakumar Katkar, who is also district magistrate, had issued a ban on mobile internet service of all mobile companies in the district for 24 hours from early Thursday morning due to the circulation of false rumours on social media following Wednesday’s violent bandh and protests over the Bhima-Koregaon violence. It still continues as some villages in the Kolhapur area, especially Rukdi village, continue to be stressful.

The collector had also issued orders under section 144 of the Cr PC prohibitory order in the district from January 3 to 16 for assembly of five or more persons, procession of any kind, use of loud speakers, amplifying instruments, musical band, crackers, and carrying any other object which can be being used for causing physical harm or violence.