Who is pressurising you, Sena, MNS ask BMC chief 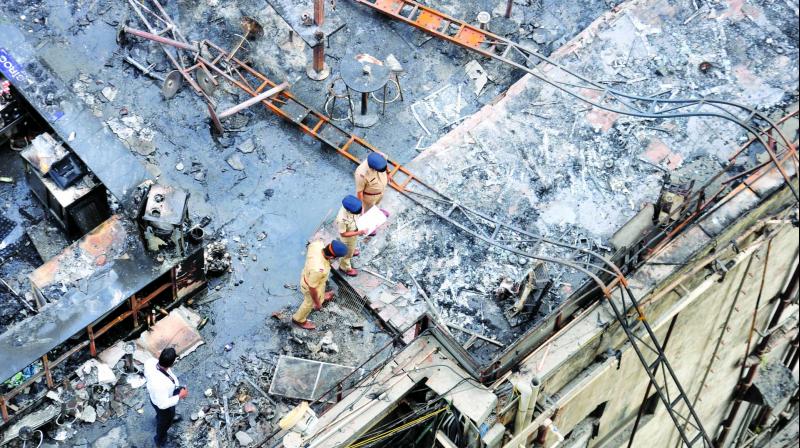 File image of police personnel inspecting the building a day after the deadly fire.

Mumbai: Pressure is mounting on Brihanmumbai Municipal Corporation (BMC) chief Ajoy Mehta to declare name of the political leader who was allegedly pressurising him against taking action in Kamala Mills compound fire incident. Shiv Sena has supported Mr Mehta, saying that action should be taken against illegal constriction without pressure. However, the Maharashtra Navnirman Sena (MNS) said that a narco test should be conducted on the municipal commissioner if he is unwilling to declare the name of the politician.

A day earlier, Mr Mehta made the shocking claim that he had received a call from a politician preventing him from taking any action against illegal restaurants.

Shiv Sena chief Uddhav Thackeray on Saturday advised the BMC chief to take action against illegal constructions and restaurants without succumbing to pressure.

“The municipal commissioner should take stringent action against illegal construction without heeding any pressure. The Sena will support his action. Only it should be ensured that the construction was illegal,” Mr Thackeray told reporters.

Also, criticising the home department — which is being administered by the Bharatiya Janata Party (BJP) — for declaring a reward to those providing information about the absconding owners of the 1 Above pub, Mr Thackeray said, “Declaring a reward for the pub owners is too much. Are they terrorists? And what is the police department doing exactly that it cannot find them?”

However, he did not comment on recent Bhima-Koregaon attack, saying that he would speak about it at “the right time”.

Meanwhile, MNS corporator Sandeep Deshpande slammed the BMC chief, saying, “The citizens of Mumbai have given them their vote for transparent functioning. If Mehta is not revealing the name of the politician, a narco test should be conducted on him.”