2K trees may be axed for projects in city

Congress has said that it would oppose the tree cutting proposals. 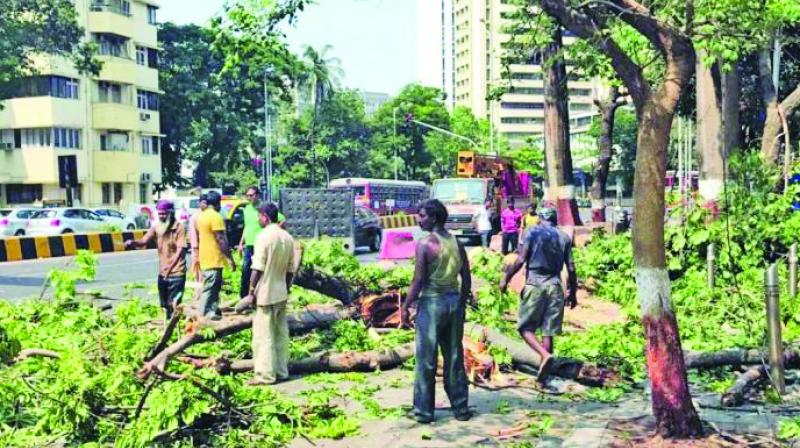 Around 893 trees will be transplanted in the city.

Mumbai: Mumbai is likely to lose more than 2,000 trees which are scheduled to be chopped for various infrastructure and development projects across the city. Of them, 865 would be cut for Metro projects alone.

The Brihanmumbai Municipal Corporation (BMC) has tabled several tree cutting and transplantation proposals for approval before the tree authority meeting to be held on February 8. According to the proposals, total 2,086 trees will be removed, of which 1193 trees will be cut right away whereas 893 trees will be transplanted.

Around 865 trees will be cut for the Metro project such as Charkop Malad West Metro IIA depot and workshop (350 to be cut and 22 transplanted), Metro III Pylon termination sub-station and car depot at Aarey Colony (105 and 32), Andheri Metro III ramp at Sariput Nagar, Aarey Colony (235 and 72) and Metro line III casting yard at Aarey Colony (one and 48).

The others projects from which trees would be cut include reconstruction of Wadibunder Central Railway yard (42 and 25), reconstruction of proposed building at BDD Chawl, Naigaum (72 and 45), development works of Somaiya Nullah from the Tansa main at Ghatkopar (89 and 14), Andheri-Milan Subway western line sixth track (3 to be cut and 164 transplanted), proposed widening of railway over bridge at Bhandup (29 and 188) and proposed widening of railway over bridge at Mulund (86 and 94).

Several proposals will come up for approval before the civic tree authority, which involves chopping and transplantation of trees in large numbers for development and infrastructure projects. However, civic activists have alleged that developing agencies and builders pay no attention to the rule of planting triple the number of trees that have been axed.

Congress has said that it would oppose the tree cutting proposals. “At one end, the ruling Shiv Sena and Bharatiya Janata Party are talking about saving the environment, and at the other end, they are damaging the environment by cutting trees,” said opposition leader Ravi Raja from Congress.