A recent study by the Bombay Natural History Society found that Mumbai was inhabited by 121,000 flamingos. 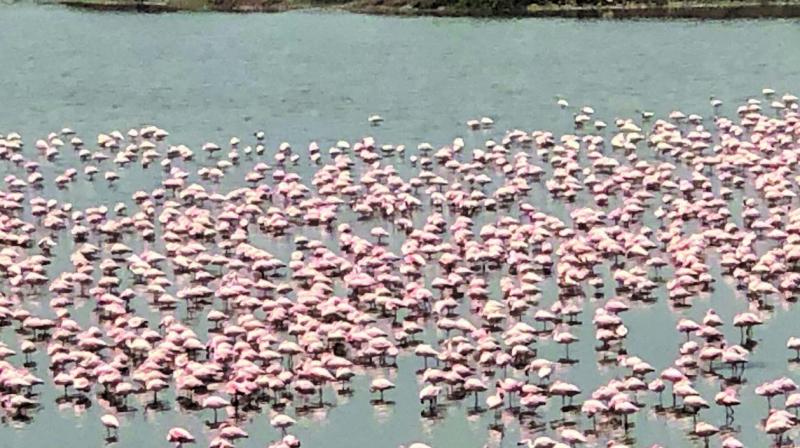 The Talawe wetland, which was under threat of commercial development for a golf course and residential complex, is now being frequented by flamingos.

Mumbai: The Talawe wetland, which was under threat of commercial development for a golf course and residential complex, is now being frequented by flamingos, much to the surprise of locals, some of whom said that their congregation had become bigger after work on the golf course was stopped following a stay by the high court.

The locals stated that like last year, they had once again come to the wetland area behind the NRI complex at Seawoods in April. “Last year too, they arrived during this time. However, they are larger in number as compared to last year. One of the main reasons could be because the work for the golf course proposed at the site was stopped by the high court. The barricades by the developer have been removed which were earlier driving these birds away,” said Sunil Agarwal, resident of the NRI complex.

Pawan Kumar Sahu, a bird photographer stated, “There is a greater number of lesser flamingos this time.” Lesser flamingos are relatively smaller with a more pinkish hue while greater flamingos are whitish in colour.  Meanwhile, a comparatively lesser number of the pink birds that otherwise have the largest congregation in the Sewri mud flats was seen this year.

“The flamingos are not present at the jetty side this time due to the MTHL work, but they can be seen at the other side in Sewri. Their number is also less as compared to last year, however it has been observed that their groups have scattered in different parts of Mumbai and Navi Mumbai,” said Pradip Patade, a bird enthusiast.

A recent study by the Bombay Natural History Society found that Mumbai was inhabited by 121,000 flamingos.

However, the number of greater flamingos which are large in size and whitish in colour is showing a decline.