CM Fadnavis said last week that recommendations of 7th Pay Commission will be implemented for state government employees from January 2019. 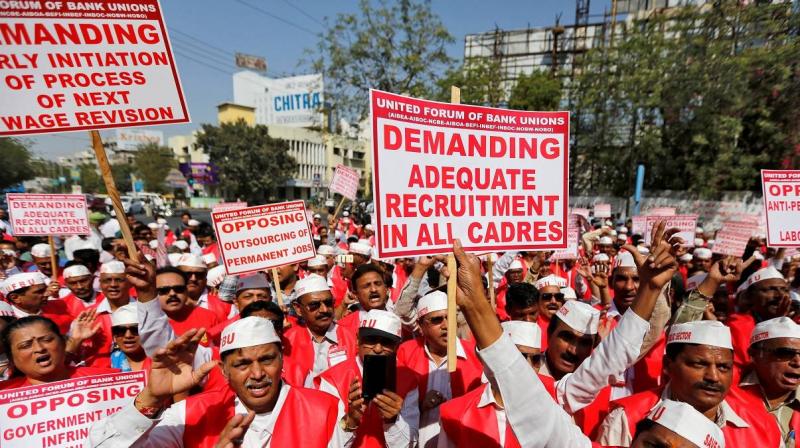 Mumbai: Around 17 lakh employees of the Maharashtra government began their three-day strike on Tuesday to press for various demands, including implementation of the Seventh Pay Commission report.

Essential services in various departments, including government hospitals, are likely to be affected as class 3 and 4 government employees have joined the strike, Maharashtra Rajya Sarkari Karmachari Madhyavarti Sanghatna general secretary Avinash Daund claimed. He accused the state government of paying a mere "lip-service" to their long-pending demands.

"About 17 lakh government employees from various departments, including zilla parishads, teachers and state-run corporations, will take part in the three-day strike," said Milind Sardeshmukh, president of the organisation which has called for the protest. The government employees are yet to receive arrears accrued to them since the implementation of the Sixth Pay Commission by the state government, he said. He claimed that 1.85 lakh posts of class 3 and class 4 employees are lying vacant in Maharashtra.

Moreover, the demand for filling up 30,000 posts on compassionate ground is also not accepted by the state government, he said. Around 30-40 per cent of total posts are lying vacant in hospitals and other essential services departments, he added.

The government-appointed K P Bakshi committee was only holding meetings for the last one-and-a-half years with various departments for the implementation of the Seventh Pay Commission's recommendations, Sardeshmukh said.

"The state is dilly-dallying on the issue of granting Dearness Allowance arrears for 14 months despite issuing a Government Resolution to this effect," he said. The government's reluctance to fill up vacant posts in various departments has increased the workload on employees, he claimed. The government has not done anything beyond giving assurances for raising the retirement age from 58 years to 60 years, five-day week working system, continuation of the old pension scheme and two-year child care leave to women employees, he said.

Daund said their organisation was against outsourcing of some government jobs to private sector and appointment of contract labourers. In an order late last night, the government said the employees' decision to go on strike will be construed as "misbehaviour" and disciplinary action will be taken against them. It said the Centre's policy of 'kaam nahi, vetan nahi' (no work, no salary) will be followed in the state as well.

The order directed employees in essential services departments - such as hospitals, fire brigade and water supply - not to join the strike, or else provisions of the Essential Services Maintenance Act (ESMA) will be invoked against them. Chief Minister Devendra Fadnavis said last week that recommendations of the Seventh Pay Commission will be implemented for state government employees from January 2019. "The arrears of Seventh Pay Commission will be given with retrospective effect from January 2016, while the Dearness Allowance will be given retrospectively for the last 14 months," he had said after holding a meeting with various employees' unions.