She alleged that the assaulters targeted her as an adivasi MP of the BJP. 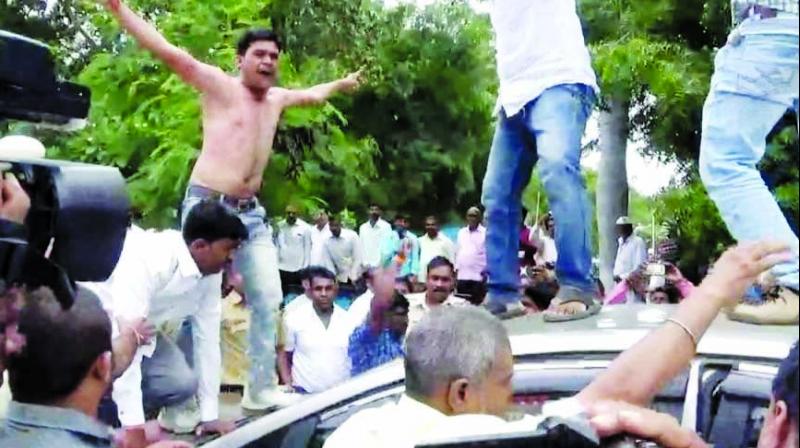 Protesters climbed on top of Dhule MP Hina Gavit’s car while she was heading to district collector’s office.

Mumbai: Bharatiya Janata Party (BJP) MP from Nandurbar, Heena Gavit, on Monday demanded in the Lok Sabha that an offence under the Scheduled Castes and Tribes (Prevention of Atrocities) Act be registered against the Maratha quota agitators who allegedly attacked her car on Sunday in Dhule. She alleged that the assaulters targeted her as an adivasi MP of the BJP.

Ms Gavit’s supporters had called for a bandh on Monday in Nandurbar, Navapur and Dhule to condemn the attack. The attack is being seen as an embarrassment for the chief minister Devendra Fadnavis-led state government.

Ms Gavit was attac-ked on Sunday in front of the Dhule collector’s office where she had gone to attend a district committee meeting, during the protest for Maratha reservation. Raising the issue in the Lok Sabha on Monday, Ms Gavit said, “Protesters attacked my car as I am an adivasi MP. There were four police constables at the spot who did not prevent the protesters.” After the attackers vandalised her car, Ms Gavit registered a FIR demanded action under the Prevention of Atrocities Act. However, the police soon released the assaulters who were later honoured.