The toilets were set up on a CSR basis by Samatech, a technology company, in partnership with BMC. 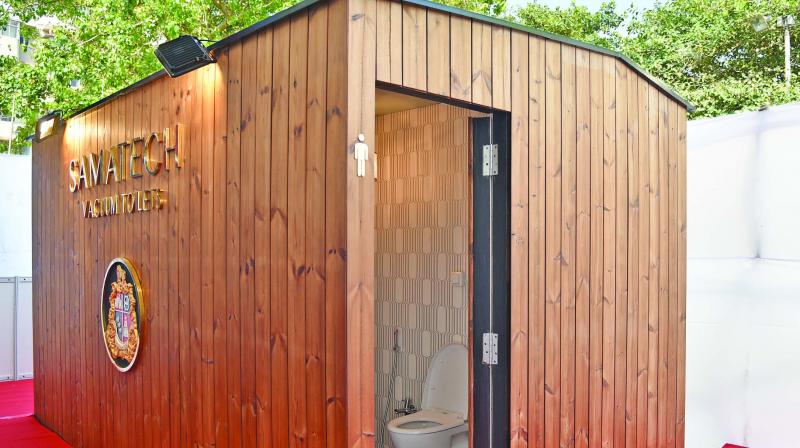 The vaccum toilet, which was installed at Chowpatty.

Mumbai: In a first, mobile vacuum toilets were placed at Girgaum Chowpatty which sees heavy footfalls on the last day of immersion (visarjan). Two such toilets were installed to save the beach from directly getting affected by sewage. These toilets have an in-built storage system which collects and stores sewage which is later directly discharged into the nearest sewage tank. The toilets were set up on a CSR basis by Samatech, a technology company, in partnership with BMC.

In case of a traditional mobile toilet, a pit is created on the beach to allow discharge of sewage directly under the sand. The civic body utilises chemicals along with sewage while discharging the latter under the sand. However, in vacuum toilets, sewage is not discharged under the sand but collected either to be later treated in the box itself or pumped into the nearest sewage treatment plant (STP).

Akshat Gupta, founder, Samatech, said, “Last time, when we introduced mobile vacuum toilets, it was used by Aditya Thackeray, the mayor and several other prominent personalities. This time, we arranged two toilets at Girgaum in a more robust manner which could be used by many.”

In May, the same firm in partnership with the BMC installed a vacuum toilet in the Banganga slums.

A vacuum toilet works on an unique technology where a vacuum pump is fitted to each toilet seat which ensures pulling the entire human waste with minimal use of water. The company is planning to install 100 such mobile toilets across slums in the city.