The participants demanded a speedy probe in the case by the Karnataka government and maximum punishment to for the culprits. 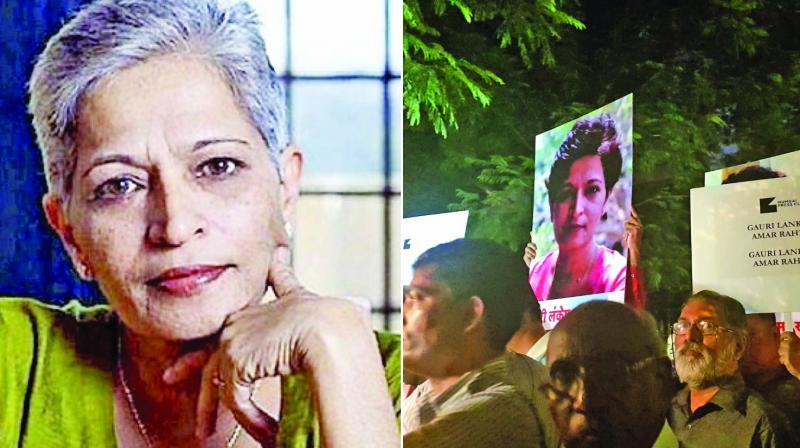 Journalist marched to demand a speedy probe in the Gauri Lankesh murder case.

Mumbai: A candlelight vigil was organised by the Mumbai Press Club and Bombay Union of journalists on Wednesday at around 7 pm in south Mumbai to condemn the killing of the Bangalore-based journalist Gauri Lankesh. Gauri, 55, was shot dead by unidentified assailants outside her home on Tuesday. She was known for her leftist outlook and blunt views on Hindutva politics. The participants demanded a speedy probe in the case by the Karnataka government and maximum punishment to for the culprits.

“A journalist being killed for doing her job is nothing but deplorable,” said Kalpana Sharma, former deputy director of The Hindu. Another protestor said, “This protest is for people to know that if you are criticising someone or trying to expose someone, some force will come to you and make you silent so that you can hide under the truth without exposing it.” Apart from writing books, Gauri was the editor of Gauri Lankesh Patrike.

Uma Pansare, wife of veteran communist leader Govinda Pansare who too was killed in 2015 in Kolhapur said that accused Samir Gaikwad, who is chargesheeted in the Pansare case should not have been granted bail by the session court. “It is because Gaikwad received bail that the fourth murder took place. Samir is sadhak of Sanatan Sanstha. I have doubts on the investigations in all four murders that is Dr Narendra Dabholkar, Pansare, Kalburgi and now Lankesh.”

A protest march was organised in Pune too, which was attended by 250-odd people. They carried placards saying ‘I M Gauri Lankesh’ and ‘Gauri Lankesh should be given justice”. Social activist Anwar Rajan said that the murder of a fearless journalist who has been fighting for right to dissent and against Hindutva forces is worrisome.