The police official said the situation was expected to become normal soon. 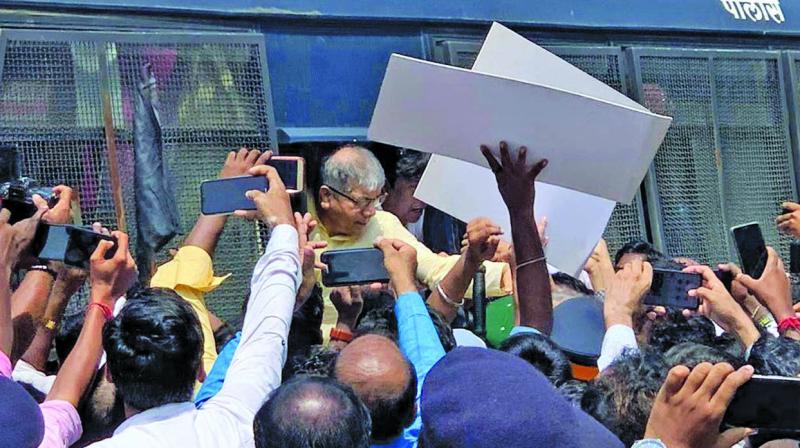 Mumbai: As the lockdown at Aarey Colony continues, the Powai police detained Vanchit Bahujan Aghadi (VBA) leader Prakash Ambedkar who was on his way to the colony on Sunday. However, he was later released.

Prohibitory orders continued to be in force in the colony and surrounding areas for the second day on Sunday, as the felling of trees was underway to make way for a metro car shed, a police official said.

While extending support to protesters, VBA chief claimed that the state is using muscle power to suppress the voice of common citizens against tree felling.

After being released, he told reporters, “The green cover in Aarey helps in the purification of air, the same way fresh breeze coming from the Arabian Sea helps in keeping Mumbai air clean.”

“We will continue to oppose the tree felling in all forms, even if we fail to come to power after the upcoming Assembly elections,” Mr Ambedkar said.

On Sunday afternoon around 2 pm, the Dalit leader took to Twitter and said, “The @VBAforIndia has been against the Aarey tree cutting from the start. I went there to protest & ask the government some valid questions. I have been detained & not arrested. I am currently at Powai police station. Don’t believe rumours & I appeal to everyone to maintain law & order. (sic)”

Heavy security was deployed at Aarey Colony’s five entry points, including the key connecting road near the Western Express Highway, to prevent people from going towards the area and to avoid any untoward incident.

Most of the shops, restaurants and roadside stalls remained closed in the area in view of the imposition of Section 144 of the Criminal Procedure Code (CrPC), banning unlawful assembly, since Saturday.

The police official said the situation was expected to become normal soon. Patrolling was stepped up in the tribal hamlets located in Aarey area and those found assembling there were being taken into custody, but later let off after proper verification.