The motive behind creating the check dam is to store water round the year. 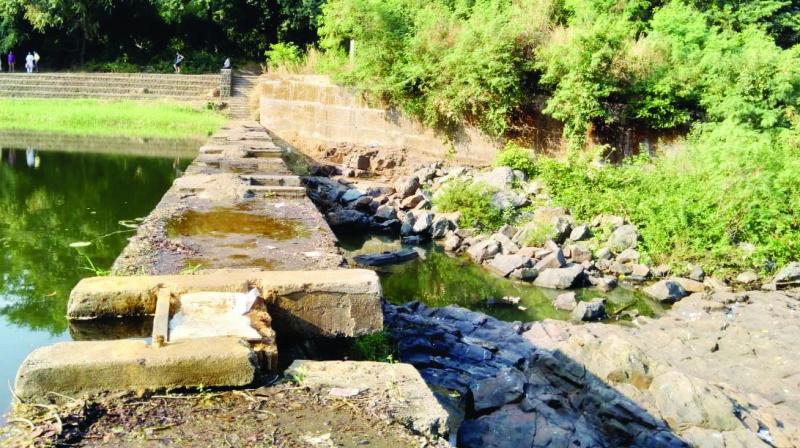 A 7-ft wall to be built along the river as it exits SGNP.

Mumbai: The construction of a check dam along the Dahisar river flowing from the Sanjay Gandhi National Park (SGNP) kick-started this week. It is the first check dam on the city’s urban rivers and is being built through community participation along the river stretch at the Dhobi Ghat area. The motive behind creating the check dam is to store water round the year.

The idea of a check dam was suggested by the citizens group, River March, which is working towards the rejuvenation of the four rivers of Mumbai, the Dahisar, Poisar, Oshiwara and Mithi. The group had approached Art of Living (AOL) for execution of the project, which will consist of building a Kolhapuri style dam.

“A seven-feet wall along the stretch of Dahisar river, just as it exits from the SGNP, will be erected. The idea is to make a proper catchment area for the river along with boosting tourism in the area. It will help in storing water in 800 meter stretch of the river,” said Subhajit Mukherjee, a Mumbai-based activist.

The site already has retaining walls, which were built by the Brihnamumbai Munici-pal Corporation (BMC), and the new wall will help in preparing the design for water-storage. The Art of Living group has allocated around `24 lakh for the project through citizens’ funding and the work is slated to be complete in another seven months.

“Apart from storing water throughout the year, it will help in keeping the ground water recharged and will also work towards restoring the natural eco-system of the river. On Sunday, several volunteers of both River March and AOL gathered at the banks of river in the Dhobhi Ghat area to start the work,” said Gopal Jhaveri, a member of River March.

Earlier in September, the BMC cleared the project, while permission for the check dam was issued by the state forest department last December.

“The first phase will include building a check dam, which will be followed by treatment of the water through regular clean-ups and the use of microbes and enzymes to keep it stench-free,” said a senior BMC official. The civic body also asserted that the check dam would help in keeping the water-pollution from the nearby Dhobi Ghat at bay.

A sewage treatment plant for the river has also been proposed to tackle the issue of sewage water in the Kulupwadi and the Dhobhi Ghat area.