Local trains remain out of reach for common Mumbaikars

Currently, only government employees and people working in services defined as 'essential services' can travel by local trains 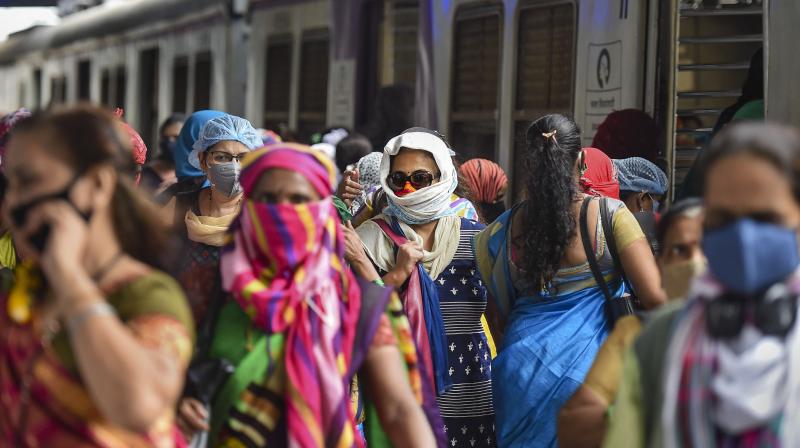 A week after the Central Railway and Western Railway wrote letters to the Maharashtra government urging it to frame guidelines to avoid crowding in trains so that services can be opened for common people, the government is yet to hold a meeting for the discussion on it. (PTI)

Mumbai: Mumbai’s local trains, which are considered the lifeline of the city, will not be open for common people before Diwali. A week after the Central Railway and Western Railway wrote letters to the Maharashtra government urging it to frame guidelines to avoid crowding in trains so that services can be opened for common people, the government is yet to hold a meeting for the discussion on it. As a result, lakhs of Mumbaikars continue to face hardships.

Ministers of the Maha Vikas Aghadi government have accused the Centre of playing politics over the issue of local trains and not resuming the services for common people despite the state government’s demand. Rebutting the MVA government’s claims, a senior official of Central Railway (CR) said that the state government did not call a meeting sought by the railways on how to go ahead with their proposal despite repeated verbal communication made by the senior officials of the Railways.

Officials in the Maharashtra government said that they do not want to rush with any decision in the wake of the second wave of Coronavirus cases experienced by the European countries. “At this juncture, our priority is to avoid the transmission of the coronavirus. Even if the suburban train services are opened for common people, it will not be before Diwali,” an official said.

Currently, only government employees and people working in services defined as “essential services” by the state government can travel by local trains. The Maharashtra government on October 28 wrote a letter to the Railways proposing that the general public be allowed to travel by Mumbai local trains during non-peak hours while following the Covid-19 norms. However, both the railways pointed out that it was not possible for them to ensure social distancing trains if all people are allowed to board trains. The Central Railway, which ferried 45 passengers daily, said that it can ferry a maximum of 12.4 lakh commuters. While the Western Railway also said that it can transport a maximum of 9.6 lakh commuters, which is much less than 35 lakh passengers it ferried every day before the lockdown.

Ministers from the state government, such as Congress’s Vijay Wadettiwar and NCP’s Anil Deshmukh have alleged that the Railways are stalling the state’s efforts to resume services at the behest of the Centre, which is trying to make things difficult for the state government.

CR chief public relation officer Shivaji Sutar said that Railways have given inputs as asked by the state vide their letter no. DMU/2020/CR/92/DM1 dated October 28, 2020 on the same day. Railways are hoping that the state government will revert soon deciding the modalities for providing services to the commuters in MMR.