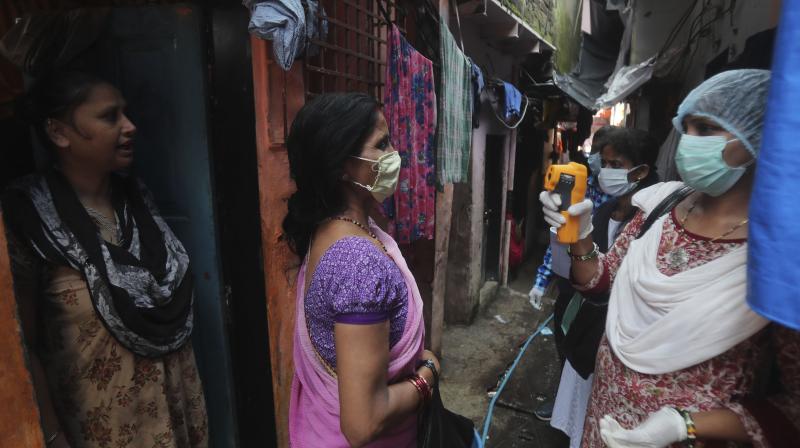 A health worker screens people for symptoms of COVID-19 in Dharavi, one of Asia's biggest slums, in Mumbai. (AP)

In the last few weeks Mumbai, the city of dreams, has recorded a reduction in the number of COVID-19 infections. For the first time, since the spread of the virus in Mumbai, the doubling period (the duration over which the number of cases double) for SARS-CoV-2 has surpassed 200 days and has now been increased to 208 days.

Moreover, Worli, one of the worst-affected areas of the Maximum City, has a doubling rate of over 300 days and in Dharavi, which is performing much better than the rest of Mumbai, the doubling rate stands at an all time high of 789 days.

These numbers demonstrate a major improvement in the situation from what it was a few months back. On March 22 2020 the doubling rate in mumbai fell as low as 3 days.

BMC data shows five of the 24 wards have a doubling rate of over 300 days.

Two of these 24 wards, namely, Worli-Prabhadevi-Lower Parel and Dharavi-Mahim-Dadar were the hotspots of the COVID-19 infection during the peak days of the virus in May-June

Aaditya Thackeray, MLA from Worli constituency and son of Chief Minister Uddhav Thackeray, expressed his gratitude to the front line workers on Twitter for the improvement in the doubling rate.

This is the effort of all our frontline warriors and strict adherence to precautions by you!

Let’s keep at it and not let our guard down! pic.twitter.com/Pgf3VJo5fx