The group was returning home after attending a marriage ceremony in Vadrai, a quaint fishing village in Palghar. 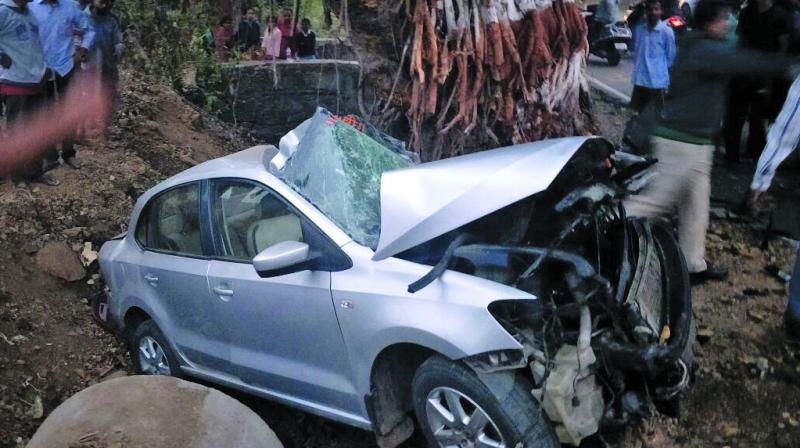 Mangled Volkswagen Vento which rammed into a tree in Palghar on Wednesday.

Mumbai: Five people died on the spot when the driver of the car in which they were travelling lost control and rammed into a tree at Palghar during the early hours of Wednesday. Such was the impact that the car — a Volkswagen Vento (bearing registration number MH48A0696) — was reduced to a mangled heap of iron after it crashed into the tree. According to the police, the mishap was reported near Patilwadi in Palghar district at around 3 am.

An eyewitness who stays in a hut-cum-pottery shop, said, “I was woken up by a screeching sound and came out, only to see the driver of the speeding car lose control while negotiating a steep turn and ram into a roadside banyan tree.” A local policeman who happened to be passing by immediately called two ambulances and managed to retrieve the bodies from the mangled car. Cranes had to be pressed into service to clear what was remaining of the ill-fated vehicle.

Assistant police inspector (API) Mansingh Patil of Satpati Coastal police station said, “As the roads were empty, the driver seemed to be clocking very high speeds and lost control while taking a sharp turn.  The bodies have been sent for post-mortem to the rural hospital in Palghar. Reports are being awaited.” The autopsy report will help ascertain whether the driver was under the influence of alcohol.