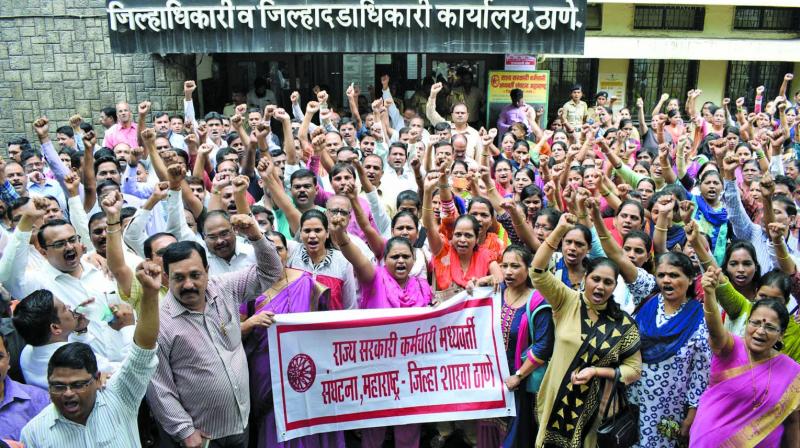 Mumbai: Strike of 17 lakh government employees for various demands, including 7th pay commission brought the state machinery to a standstill. These workers are on three days’ strike. Government has made efforts to pursue them with clearance or dearness allowance, but the organisation is aggressive on other issues like age limit.

Different organisations of government employees in various departments, including schools, colleges, hospitals and also secretariat has given call of three days strike started from Tuesday.

They are demanding for implementation of 7th pay commission, working week should be of five days (all Saturdays off), huge vacancy of 1.85 lakh posts in all departments of state government and others.

On Tuesday, grade three and four employees were largely on strike in all departments. Maharashtra Rajya Sahakari Karmachari Madhyavarti Sanghatana leader Avinash Daund claimed success of strike on the first day. “Almost 17 lakh employees from all over the state are on strike. Government is doing just lip service. Our demands are long pending and there is no action from their side,” said Mr Daund.

On Tuesday, Mantralaya and other offices of state government in Mumbai were largely empty. Peon, clerks and other grade three employees didn’t turned up to the state secretariat. A similar picture could be seen in all Zilla Parishad offices in all over districts.

Meanwhile, state government has already declared that the pending dearness allowance of fourteen months would be cleared from this month.

Also, state government has formed a committee for implementation of the 7th pay commission. But, the employees union, especially teachers and others were not satisfied over this. So, they have given call for the protest.