At around 2.30 pm, an IAF AN-32 aircraft helped the navy airlift at least five additional rescue teams from Pune to Kolhapur. 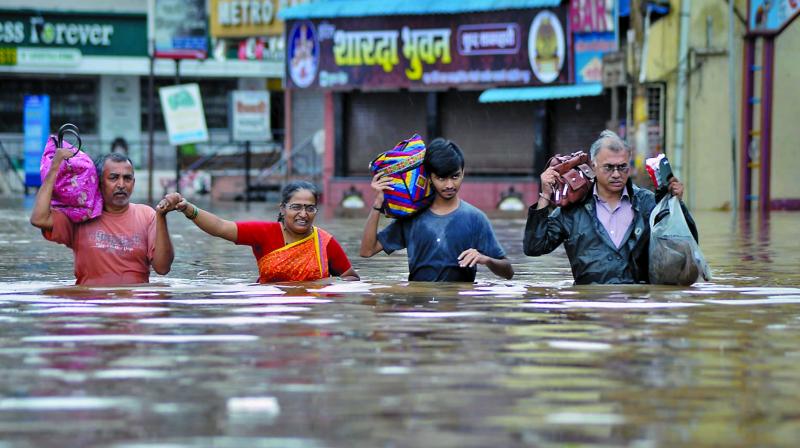 Mumbai: Over 1.32 lakh people were evacuated in Western Maharashtra as rescue operation in flood-affected Kolhapur  and Sangli continued in full swing on Wednesday.

The mission was initiated in response to the state administration’s request to assist the local populace affected by heavy rains in the area, the Indian Navy said.

The navy revealed that the teams first proceeded to Pune by road overnight, equipped with rescue gear and rubber inflatable boats, and then were airlifted to affected areas as requested by the state administration.

The Indian Navy also arranged for help from Goa to facilitate rescue operations, which began on Tuesday. “Four separate teams were mobilised from Goa Naval Area and brought to Kolhapur by naval Dornier aircraft and ALH helicopters. We have also begun assisting distressed people near Shivaji Bridge and Chikli village,” said Mehul Karnik, chief public relations officer (CPRO) of the Indian Navy, adding that rescue efforts were likely to continue.

More diving equipments were flown from INS Hansa in Goa to the Kolhapur airfield on Wednesday morning. These gears were later added to the rescue operations, which also involved teams from National Disaster Response Force (NDRF). The navy said that they were keeping a close watch on the situation in Kolhapur and making required arrangements for the rescued population.

Kolhapur and Sangli districts have been the worst affected by heavy rains in western Maharashtra in the last few days.